Mustang Sally! Our resident wild child with powers of cuteness so intense they may actually knock you backwards.  This dog is smart, beautiful, and playful to the max.  She's the whole package, folks.  Mustang was described as a "sponge" and her favorite kind of dog to work with by a prominent local trainer.  She's described as awesome and hilarious by everyone at APA! lucky enough to know her.

Mustang is a saucy chick about town and, in addition to participating in APA!'s LFS Program, she gets to go on regular slumber parties and adventures with her best lady, Ariana, who happens to be APA!'s invincible Dog Behavior Manager.  They would like to share some of their fun with you to help get you prepared for your new life as Mustang Sally's partner in crime (because we know you won't be able to resist adopting this spectacular creature)... 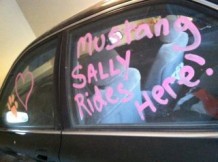 Of course, they need a sweet ride for that whole riding around town thing.   Mustang prefers to sit shotgun. 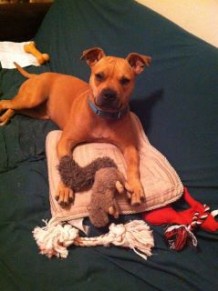 Sometimes it is time for TOYS!!  Mustang keeps trying to teach Ariana that socks make great toys too!  Ariana says Mustang should nom on the squirrel toy instead.  But Mustang will keep trying. 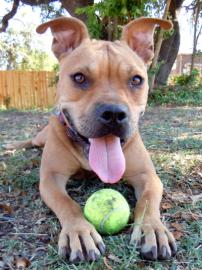 Other times there is fetch!  Mustang romps after the ball like a goofy puppy and brings it back so she can hear how awesome she is.  Fetch with Mustang Sally or anything where you get to see romping puppy frolic in action is guaranteed to make you laugh out loud. 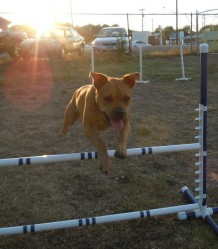 Mustang also likes to show off her amazing prowess and athleticism on the agility course!  Jumps?  Ramps?  Balance beams?  Weaving poles or obstacles?  Ain't no thang to this girl!

Some times are for napping. 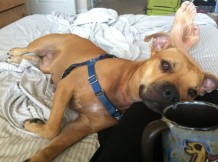 It's also very important for both ladies to get their snuggle time in.  Lazy mornings are always a good time for this.  Mustang is flexible though and willing and able to make snuggles happen pretty much 24 hours a day if necessary. 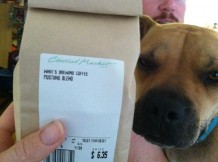 Luckily, there's no need to over do the nap time...  It turns out Mustang has her very own coffee blend!  This will help you both keep your energy up for romping and adventures! 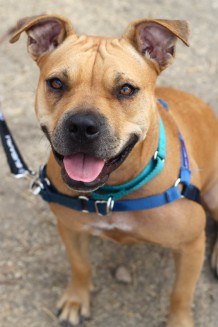 Sally thinks romping and adventures are the bestest things! 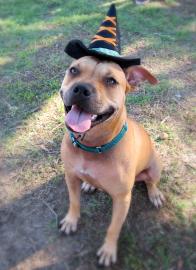 For Halloween, Sally agreed to model a few or our doggie costumes for us.  But only on the condition that she was allowed to choose one of the outfits.  The witch hat was cute & all but Sally wasn't sure it was really her thing. 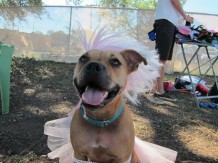 She prefers the punk rock pittierina ensemble.  It captures her spunky awesomeness much better, don't you think?

Outfit or no, nap time or play time, Mustang Sally is a one in a million dog who's ready to find her human soul mate.  Email [email protected] for more info or visit our website to see where you can meet Mustang each day.  Either way, get ready to add a big dose of laughter and style to your life with this spunky canine rockstar!

*Follow Mustang Sally and the rest of Louie's Fresh Start pups on facebook and learn more about how you can support our program!