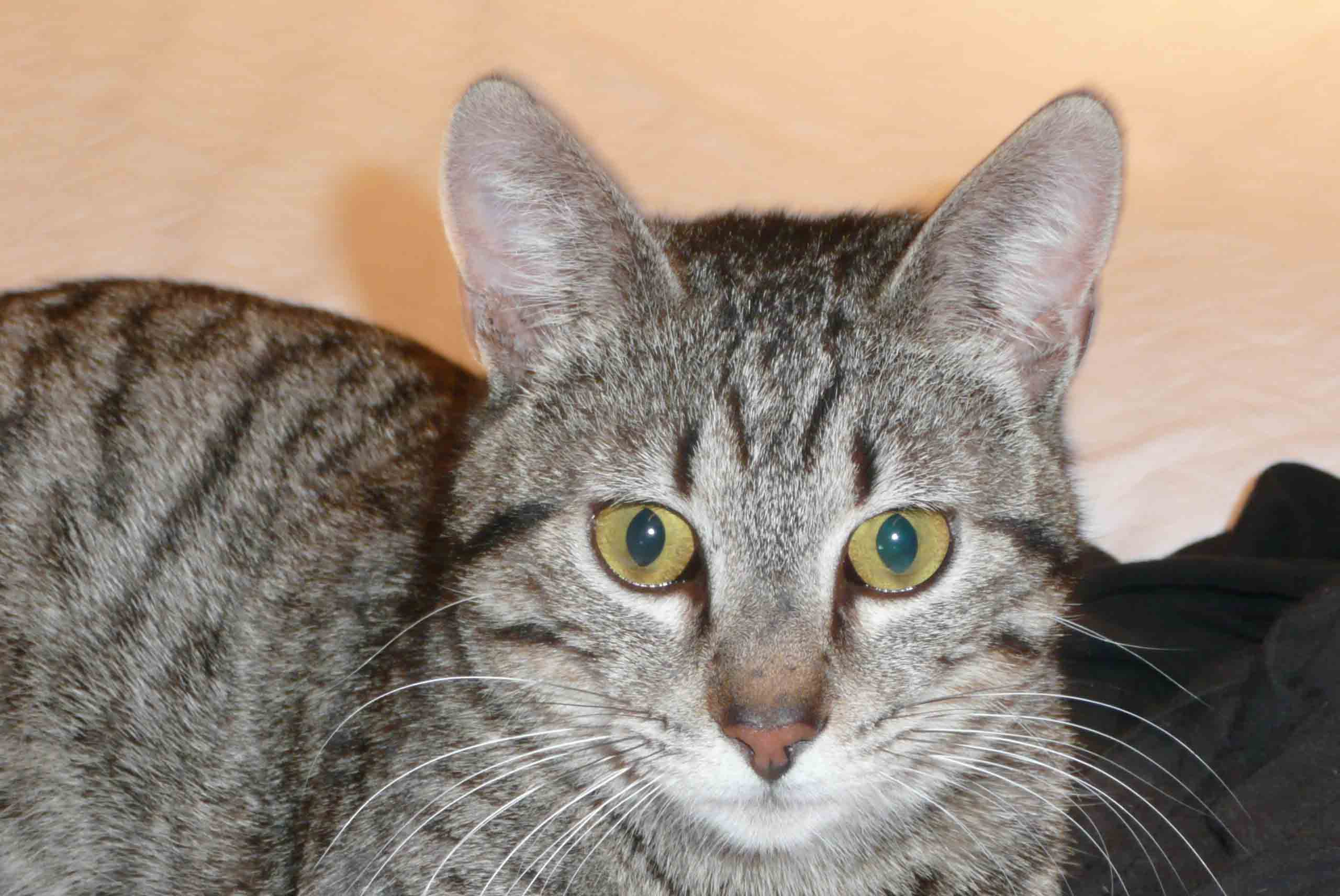 Dewey’s story: Dewey, our beautiful, sleek, grey, brown with black stripes tabby, was the most shy cat, we'd ever met.  For the first 2 days, he hid behind the toilet, and wouldn't come out for anything.   He even waited till we left, to eat.

Dewey was brought in to the Town Lake Animal Center as a stray, and one morning, workers at the shelter found him with his front paw stuck in the cage door.  Overnight, he worked so hard to get out of the cage that he was able to get his elbow out through the slat of the door but once it was out and he figured out he couldn't get the rest of his body out, he couldn't get the elbow joint back in.  So he had to hang there until the staff got there in the morning.  Poor boy.

So that day, now that he needed a lot of veterinary care to recover from his injury, he was put on TLAC's euthanasia list, which was shame, since there was nothing else wrong with him.

I received a call from a woman who has been volunteering there for 6 years, asking if we could please take him.  We said, "Of course!"

The vet who checked him was afraid his paw may have to be amputated, and the poor boy would have to learn to live with 3 paws.

Slowly, but surely, we'd coax Dewey out from wherever he was hiding, and slowly but surely, he began to first, purr when petted, then finally, would approach us.  Every day, he would come out of his shell more and more, till one day, he jumped up on the couch, and started snuggling and purring between us.  We both had tears in our eyes at that point.

It got to where Dewey couldn't wait to be around us, and loved having his stomach rubbed.  Oh, and his paw? Almost 100% recovered.  He now walks normally, and has just the slightest limp.  He is the sweetest boy, who gets along with other cats.  That's Dewey, our 2 year old sweetheart.

Dewey was adopted last week by a young man who took not only Dewey, but Dewey’s fostered brother, Leo. Leo’s story is next. 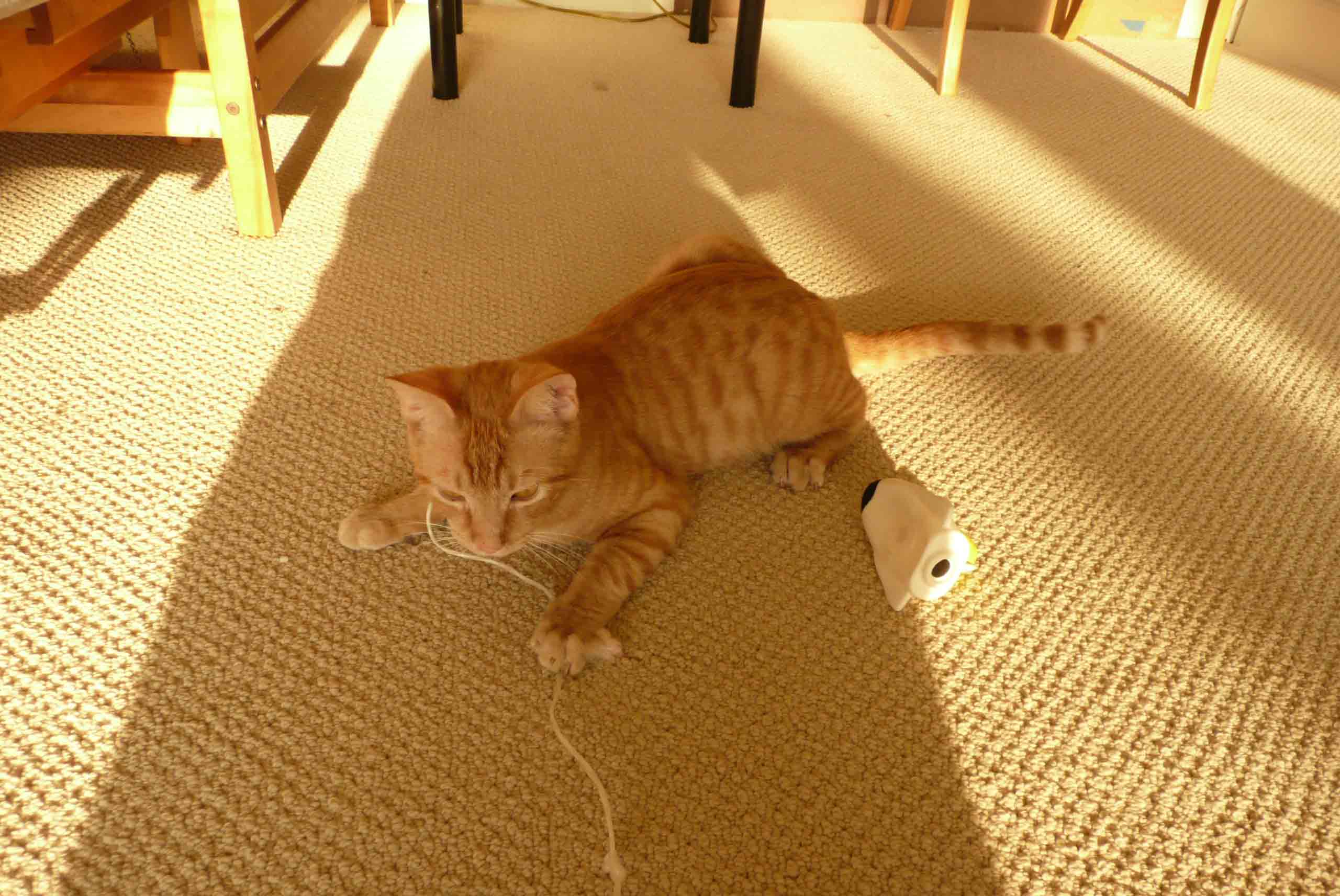 Leo’s story:   We were asked to take in this 8 month orange tabby male.   Seems like he was left with someone by a roommate who left town, and the poor woman already had enough animals.   So I thought, "Oh, good! A sweet, little kitty for Dewey to play with!"  So we said yes, we would take Leo, and he and Dewey can entertain each other until they found homes.

Well, when one gets a new cat, it is suggested that they live in a confined area for a day or two, just to get used to their surroundings.  That's what we did with Dewey, who seemed to like that.

Leo, on the other hand, was confined for about 5 minutes.  He was comfortable.   Boy, was he comfortable.   Leo immediately owned the whole upstairs of the house.   He is one, tough "dude".  He is All Boy.   If he can get into mischief, he will.  Very independent, very playful.   He is big for his age, but definitely acts like a kitten!  Plays and plays with you, if he wants. :) But when he gets tired or his ready for a nap (and he naps a bunch), if you pick him up, he is like a rag doll.  Just melts in your arms and purrs.  In that way, he is a real sweetie.

We were so happy that Leo and Dewey found their forever home together. Though they’d only met a few weeks before their adoption, they had bonded, and were caught several times cleaning each other, and taking naps side by side.