The Story of No Kill Austin: Grassroots Beginnings

It’s now been eight years since something of a revolution began in Austin, when a group of passionate volunteers set out to do what most other people thought was not possible. We decided that every healthy and treatable dog and cat that arrived in Austin’s city shelter would be saved and adopted out. We were determined to make Austin a No Kill City. There was a long way to go. In the year leading up to our beginning, during one hot June in 2008, we had seen over 13,000 puppies, kittens, dogs and cats die needlessly in the shelter. That had to change.

I became a veterinarian to help animals and it was unbearable to me to see so much needless death. I had believed that the way to stop the killing happening in our city shelter was to reduce the number of animals arriving there in the first place. I founded Emancipet in 1999, to provide low-cost spay/neuter services to the community, believing that this would decrease the death rate. Nine years later, 50 percent of cats and dogs, thousands upon thousands of them, were still being killed. Meanwhile, a group called FixAustin, led by lawyer Ryan Clinton, had been working relentlessly to bring the issue to light for the public and stop the killing by persuading our local decision-makers to change policies. FixAustin had gotten my attention about the continuing death rate in the shelter. That sparked the idea that there might be a more direct way to change the situation, and so I and a small group of others also ready to act joined together at Austin Pets Alive!.

Back then, just as at all other large city shelters across America, city shelter staff would make a list every evening of dogs and cats to euthanize so that there would be room in the shelter for the next day's intake. Often there was only an hour to intervene on behalf of those condemned pets because the shelter was closing soon after we got entry, and pets on the list would be gone before the shelter opened the next day. We knew that if we could save animals from that list, the ones that had already been overlooked by the public, the rescue groups and area shelters, and not found by their original owners, we would be able to make a measurable difference in the save rate for that day. We knew that if we wanted to see Austin reach a 90% + save rate, we had to focus solely on the animals that would definitely die.

We at Austin Pets Alive! knew our community wanted this problem solved. A resolution had been passed by city council after lobbying by animal advocates in 1997 to make Austin a No Kill City by the turn of the millennium. Progress had been made through spay/neuter initiatives, education, and some improvements at the shelter. Yet in 2002, Austin was still killing 50 percent of the animals at the shelter and this percentage did not budge over the next years. Austin, of all places, could and should do better.

In 2008, I signed on as executive director of APA!. I was a volunteer like everyone else. With only sheer determination and creativity, we set out to make Austin a No Kill City as fast as humanly possible. We had no funding yet, no building, no staff. However, the community was on our side, so we started there in building our army. 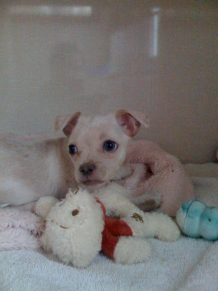 The key to our beginning was foster homes. APA! volunteers would go to the city shelter every night, 365 days a year, to review the list of animals slated to die the next day. Our rescue team would go up and down the lines of cages, finding those we could save, and using our cell phones to call our growing network of fosters. Where there was a foster home available, there was a life saved and incredible joy. It was tumultuous, emotional work, a time full of highs and lows. We were saving lives, nearly 800 by the end of 2008. But we had put ourselves right in the face of an ongoing tragedy, seeing up close the eyes of deserving dogs and cats we knew were about to die because we could not take all of them yet. The work was urgent. We had just a few hours to pull what we could, transport the pets out and get them into homes.

Those were the days when APA! set up an adoption site in a parking lot on South Congress. Everything was run by volunteers. We had no financial support from the city or any other government entity (and still don't now). Our funding came from ordinary people in the community, as the majority of it still does. People dropped their dollars and coins into donation jars, or sent in checks. We made do with what we had; we used every kind of free resource we could. Most importantly, we did not give up even when every resource was a struggle because we knew we were working for a community that wanted someone to lead the city to a solution. Every time a beer joint hosted a fundraiser, every time a happy adopter shared a picture on Facebook, every time a person put an APA! sticker on their car, we were reminded that being a No Kill City was becoming an Austin core value.

I remember one foster parent who, while standing in line at a coffee shop, talked to the person next to her - a complete stranger. The conversation started because of her foster dog. Her dog had just survived the shelter and had also contracted distemper while there, one of the most devastating diseases known to dogs. She’d been selected for euthanasia, and our rescuers found her huddled in a ball in the back of the kennel, shaking in fear. She was only 6 months old. At that time scared dogs were not surviving the shelter, but a scared puppy was something different. We called her previous owner who told us the story that we couldn't have known by reading her paperwork. They had found her as a little newborn puppy under a bush. They bottle fed her and loved her to death. She was not accustomed to the big world because they had given her a very sheltered life after her early troubles out in the wild. Three nights before she hit the euthanasia list, the owner's house had burnt down. The owner lost everything and while grateful she had survived the fire, she could not reclaim her dog from the shelter. She begged us to save her.

Now that we knew she was a family pet and not feral, we agreed we had to give the scared little dog a chance. That is where this foster parent came into the picture, giving her a spare bathroom to live in while we looked for an adoptive home. However, she soon developed signs of distemper and battled that horrible disease for months. Her foster mom walked her through every step. In line that day at the coffee shop, the foster talked about the heroic measures we all took to save this dog’s life. And guess what? The person in line next to her has been an annual major donor to Austin Pets Alive! to this day. And the best part is that the foster parent adopted sweet little "MJ."

While we were saving lives like MJ’s; while we were recruiting fosters, donors, and volunteers by the dozens, we were also fighting to get the powers that be on board with No Kill. APA!’s work was actively opposed by all the groups that you would think would be supportive. We had to educate the city council one by one on what No Kill means and how it was possible. And because the community rallied behind us every step of the way – showing up at Council meetings in droves in their APA! shirts, talking to their friends, recruiting more new fosters and volunteers, making donations, the Council listened. In March 2010 we got the top-down mandate we needed to start making real change. It went into effect immediately, ordering the shelter not to kill pets if there were any cages empty in the shelter. I will never forget that day. It was the first day in as long as Austin had an animal shelter that NO pets were killed. We went to “walk” the euthanasia list and found no pets there. None were killed the next day, nor the next. The cages did fill up in less than two weeks, but we relished the win and finally felt like we were near a tipping point. And that’s when progress really began to happen.

In the coming weeks, we’ll be posting about the story of No Kill in Austin, as a reminder of how far we have come. We want to celebrate the joy of No Kill, the happy stories of animals saved, cured of diseases, recovered from injuries, and going on to make adoptive families happy. On our Facebook page over the next six weeks we’ll be sharing their individual cases and their photos, and telling how they all got to be saved. We’ll be celebrating an achievement that astonishes other communities that are still trying to do what we have done here in Austin. But we are also describing this history to remind those who may have forgotten, or never knew about, those days when the light went out of the eyes of dozens upon dozens of cats and dogs every day, needlessly, because we in Austin had not yet made their lives worth saving. Stay tuned.