Canine Parvovirus is a highly contagious, life-threatening virus that rapidly infects and divides cells in a dog’s body, which most severely affects the intestinal tract. Showing signs of parvovirus infection once meant immediate and absolute killing of puppies and dogs at city shelters. Parvo is treatable, but extremely expensive and many shelters do not have the resources to set up a Parvo Ward. APA realized  years ago that many puppies with parvo were dying in shelters and there was a gap needing to be filled. Thus, the APA Parvo Ward was started. Now, instead of euthanizing, the city shelter can call APA to come to the rescue. The number of puppies APA can continue to pull is directly related to funding support. Donations changed the lives of Hector, Rhondo, and Brockley, who all survived parvo and now live happily in forever homes.

So far this year 400 pups have been treated in APA’s parvo ward. Last year at this time, 180 pups had successfully beat parvo because of our ward. APA has more than doubled the number of dogs it has rescued from the kill list, taken into its ward, and treated for the fatal parvovirus. The parvo program at APA is one of the only parvo wards in the country, and it is revolutionizing the way shelters deal with this very treatable disease that used to be an automatic death sentence.

Parvo survivors are some of our biggest heroes. One touching story from this year is the story of Miracle. This small poodle mix came to APA after a very traumatic day. She was slated to be euthanized at the city shelter for a possible broken neck after she was found abandoned and attacked by another dog. Our medical team thought there was hope and sent rescue transporters to the city shelter to pick her up and bring her over to the APA clinic. Dr. Johnson, one of APA's veterinarians, had the unresponsive puppy on the medical table as she examined her organs and spine for injuries. As Dr. Johnson was quickly administering fluids through an IV, the puppy perked up just enough to look at everyone and let them know she was okay and staying with us. The vet techs shouted, "It's a miracle!", hence her name. Amazingly, her neck was not broken- just severely injured. Things were starting to look up. Two days later she was holding herself up and able to eat on her own. Four days later she was doing much better and began to walk again.

As soon as she thought she was out of the clear, she became lethargic. It did not take long to realize that she had parvovirus. APA immediately admitted her into the Parvo Ward and started her on treatments. About a week or so later, Miracle was healthy again and ready to enjoy some time in a foster home. Below is a picture of her happily cuddling in bed with her foster after treatment. 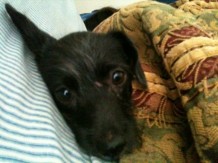 This little girl not only survived a traumatic neck injury, but she went on to survive parvo. In October, Miracle found her forever home.

Without supporters like you, dogs like Miracle would not get a second chance at life, well third in this case. :) 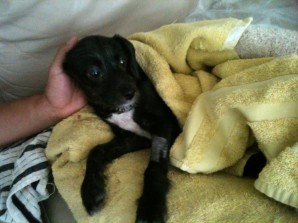 Our medical funds are depleting, and we need donations to continue saving animals needing parvo and other medical treatment.  To help us continue on this No Kill journey and save as many animals as we can, join the Constant Companion Club and become a monthly contributor.  http://www.austinpetsalive.org/donate/constant-companion-club/