A Note from Ellen Jefferson

Like many animal lovers, I have been accused of loving animals more than most people, which is why it might come as a surprise to hear that I want to take a minute, during the month of thankfulness, to celebrate people. That’s right –PEOPLE.

For a long time and even now, the prevailing attitude in shelters has been that people are the problem that has caused animals to be killed in shelters. It isn’t directed towards shelter employees but those people outside the four walls of the shelter, you know- the community.


I believe that there are two reasons for this attitude:

When APA! was re-engineered into a rescue entity in 2008, a very deliberate decision was made. APA! specifically chose to view the community and the people in it as potential heroes and thus created the tagline “Helping people help pets.” We believe that the good outweighs the bad, the good always wins eventually, and if people are given the same knowledge that we have about pets' needs, people will rally to help pets. We believe that it will be people who will solve the issue of animal death in shelters.  Think about it like a math game: all the animals are brought there by a person. A certain number of people-generated actions had to occur to land the animals there. As sad as that is, we believe that if we can get enough people to take an equivalent number of actions, the process could be countered and animals would be saved by actions instead of killed by actions.

I get a little teary-eyed thinking about all the ways that people have contributed to saving lives this year. On top of the hundreds of people who foster every day, the 600+ adopters that come forward every month, the volunteers who put in over 2,000 hours every week, the donors who are essential in keeping the shelter operating, and the staff members who work their hearts out every day, there were a couple of shining moments when even more people stepped into the ring to be heroes.

Neville is a perfect example of what’s at stake when the choice is made to either embrace people or blame people. A shelter dog, with literally no hope of survival, depended on people to advocate for him, fundraise for him, and adopt him. Those hundreds of thousands of people saw their own story and the lives of their pets in Neville’s story and truly understood that his life was worth saving. The movement to #SaveNeville proved that many people agree with us at Austin Pets Alive!, that people do care for animals, even those that are not perfect, and want them to have a second chance. Neville’s story isn’t about a “problematic community,” but rather it is about the people who believed he was worth saving and stood up to say ‘We Are All Neville!’. 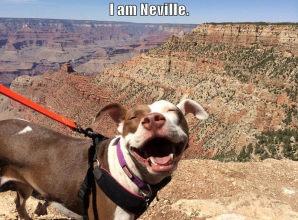 It is no accident that Austin is the largest No Kill City in the US. This didn’t happen because of magic. It happened because the people, who are absolutely necessary for countering the actions of those few other people that cause pets to be in shelters, stepped up and took an action. And because those life-saving actions are repeated day after day, year after year, tens of thousands of pets in Austin and beyond get to live.

On behalf of Austin Pets Alive! and the animals that have been given a second chance by people, I want you to know how important you are to No Kill. Every animal that is alive today is incredibly thankful that you are a person in our community.