Phil and the Radiohead kittens 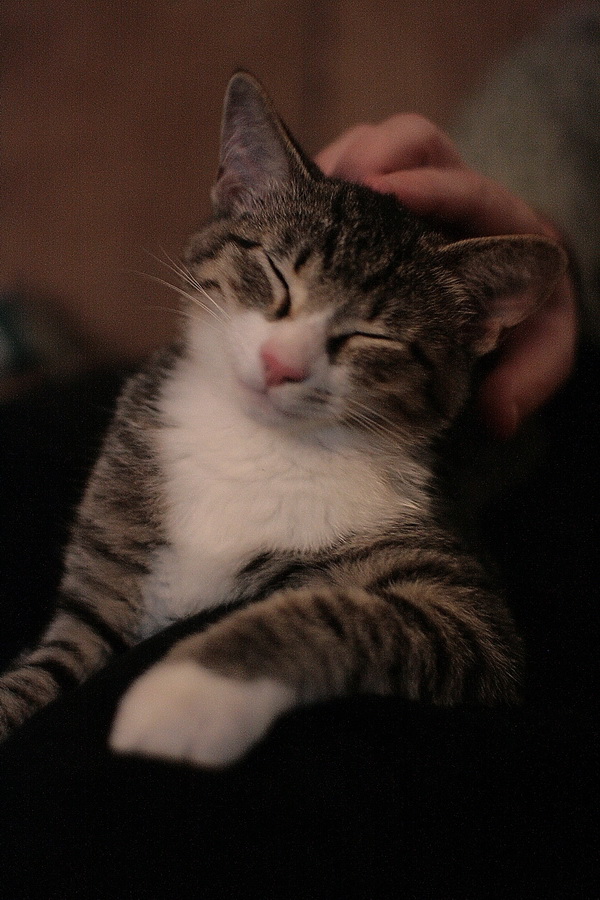 Only a few months ago three week old Phil, along with his five brothers and sister, sat at Town Lake Animal Center waiting to die. The babies were put on the euthanasia list because they were so young and the shelter did not have the resources to care for unweaned kittens. Thanks to our amazing dedicated foster parents, Phil and his six siblings were saved!

Phil's foster mom had to share her experience with these very special little kittens:


"Last August the plea went out to APA! fosters. Who can take seven, yes seven, three week old kittens? I'd handled litters as big as 8, so I volunteered and picked up the full kitty carrier of 7 tiny, hungry, wide eyed, mewing darlings at the PetsMart. 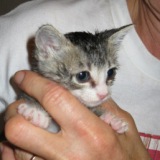 
"They were already socialized with humans and bonded to me instantly. They would stampede the kitty condo door to be first out and first to the warms bowels of milk replacer I'd laid out on a big towel for them. It took a few days for them to learn not to take suicidal leaps out the cage door and wait for the mommy hands to help them down to the floor, but they caught on quick. They would dive into the replacer and have it all over them. Too young yet to groom themselves, I had to take over the task of mommy lick baths with a warm, damp washcloth after each meal. 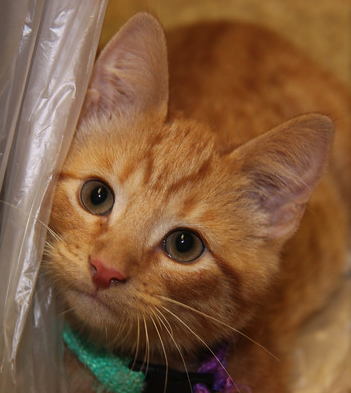 
"The kittens grew rapidly and their personalities began to show. I liked naming my kitties after musicians, so I tapped into Radiohead as a resource and came up with Thom E., Colin, JonJon, Ed, and Phil. The only girl of the litter, a beautiful black and orange tortie, I named after Thom Yorke's wife, Rachel Owen. The precious orange and white tabby boy was named Elliot at my neighbor Betty's insistence, so I said he was named after Elliot Smith. 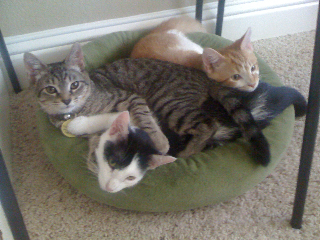 
"When I loaded the kittens into a basket and carried them to my bed for some quality bonding time, Rachel would sit on top me and watch her brothers wrestle below. She was already letting the world know she was a princess and was above such things.

"Once everybody got spayed and neutered, the whole bunch took up residence at the PetsMart cattery. Thom E., Ed, and Elliot were adopted within the first week. As three weeks of cattery time came to an end, I got the call to pick up the four remaining kittens. 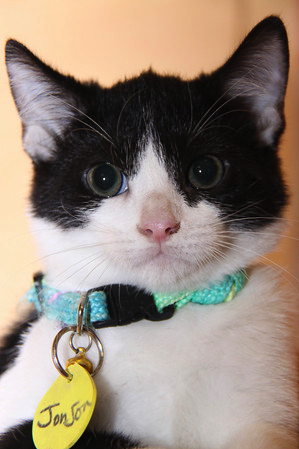 
"They came home with a touch of diarrhea and all four were prescribed treatment by APA!'s veterinary President, Dr. Jefferson. However, I also realized that something was very wrong with Phil. He was dropping weight rapidly and overnight began to loose control of his hind legs. When he tried to walk, he flopped over as his legs gave way. He was still his happy, loving self, but he seemed dizzy and drunk. 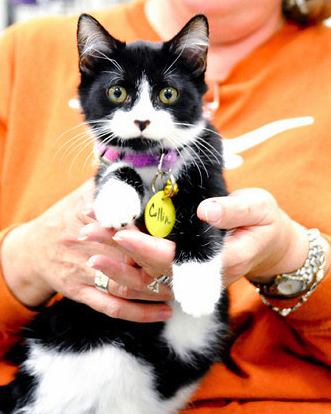 
"I was very sad for Phil. He was such a wonderful kitten, but who would adopt a cat that couldn't walk? I decided I'd just keep Phil myself if he was unadoptable and disabled. No way was this wonderful, sweet baby going to want for a permanent, loving home. I'd find a way to welcome him into my already huge cat family (twelve).

"Then a wonderful thing happened. Phil began to improve! Within days of being on the medication Dr. Jefferson prescribed, Phil had regained the full use of his back legs and lost the dizzy, drunk look. He was also gaining weight with each day.

"Dr. Jefferson thought that he had picked up an odd parasite that lodges cysts in the spine or brain and prescribed a strict schedule of powerful antibiotic drugs for 28 days to wipe out the cysts. During that time, Phil would be living with me. 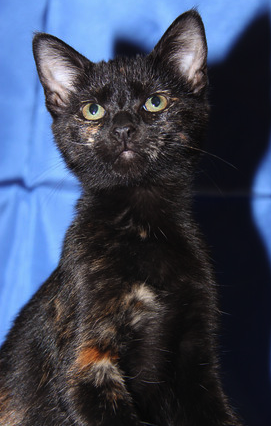 
"Meanwhile, Rachel and Colin found their forever homes and JonJon was adopted by three young boys who worshiped both cats and Radiohead. But who would adopt Phil? He was banned from APA! adoption events because of his illness for a month. Fortunately, his 'glamour shots' taken by an APA! volunteer photographer were still on the APA! website.

"It was here that he was spotted by Mark and Janice who were seeking to fill a big, sad hole they had in their lives after loosing a beloved furrbaby a few months before. APA! forwarded an email to me from the Hays, and we talked about Phil. I warned them about Phil's illness and the possibility that he could suffer central nervous system damage, but offered to let them meet Phil anyway because he was getting so much better over time. 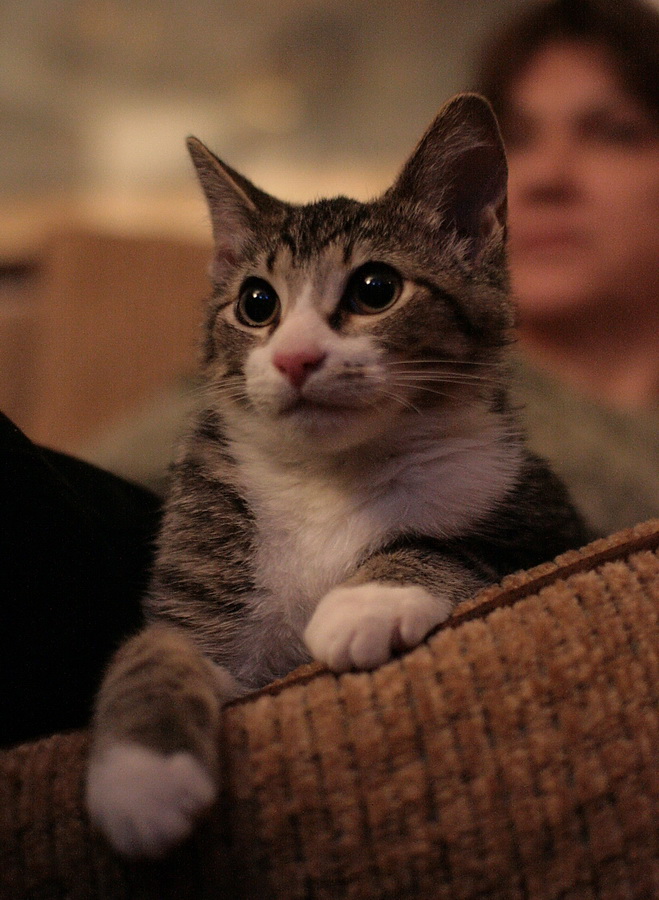 
"Mark and Janice came out to my farm a few days later and met the fabulous Phil in person. It was immediately obvious that Phil and Mark and Janice belonged together. Mark is a drummer, so knowing Phil was named after the great Radiohead drummer, Phil Selway, confirmed that Phil was meant to be their kitty.

"Mark and Janice agreed to wait for Phil to finish his medications before finalizing the adoption. On Nov. 18th, after Dr. Jefferson declared Phil well and healthy, I delivered Phil to his new parents.

"My cousin and I miss Phil and his sunshine love, but we know he is being greatly loved in his new home. 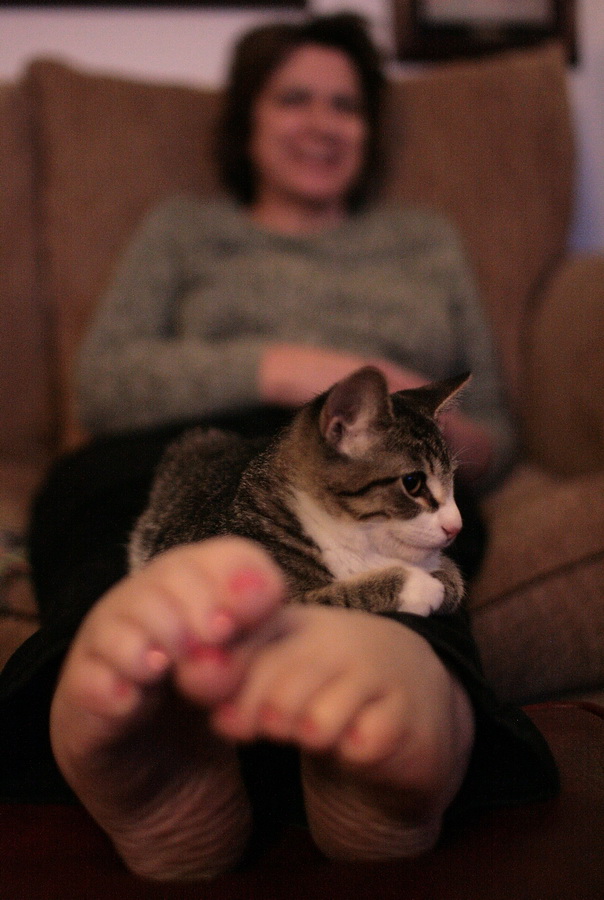 
"This holiday season, I am blessed to have had the chance to save this little angel and his 6 siblings from a sad and needless death. Together with APA!, Phil has brought joy and love and new light to the darkness in both my home and the Hay's home demonstrating the true meaning of the winter solstice season." - Margaret

Mark and Janice, Phil's new forever family was kind enough to send these gorgeous photos of Phil at home (what a handsome cat!) along with this note:


"Phil is settling in and doing great. He settled in very quickly here and is busily checking out all the new stuff and making friends with Willie. He's already got the kitty door to the garage and the litter box figured out. He slept on our heads last night purring so loudly it made me want to change his name to Jack like a jackhammer. He's an absolute charmer and we couldn't be happier to have him. Rest assured he'll be loved and adored here. He's a special little guy and Janice and I thank you very much for fostering him and letting us take him." 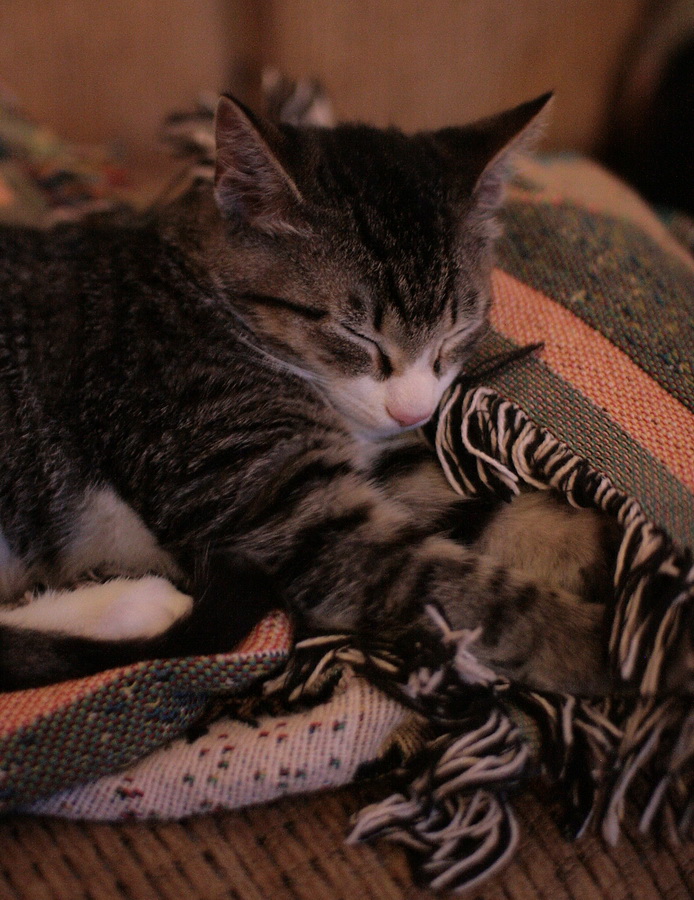 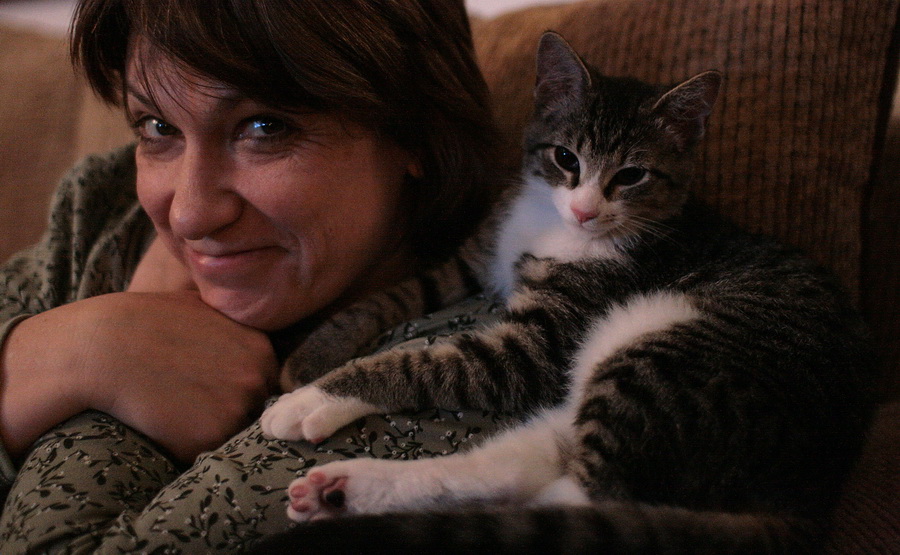 Elliott (orange) and Ed's (gray tabby) new family also sent us some pictures of the boys with their new buddy Bruiser (black and white). These cats are one big happy family and are doing great! 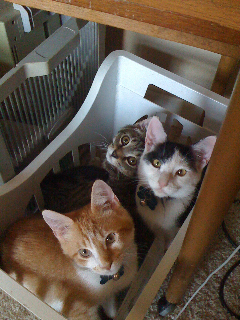 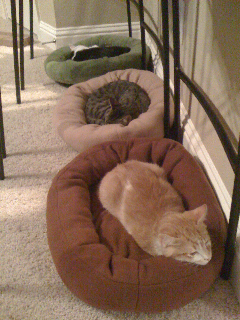 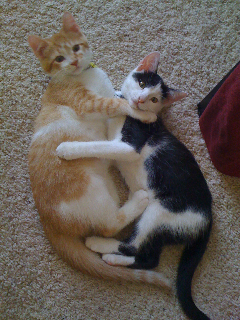 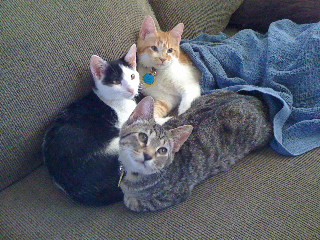 Thanks to all our cats' new families for letting us share these wonderful photos on the blog! We love seeing our kitties safe and loved. It reminds us of why we take so much time caring for cats and kittens like these in hopes that they will find happy forever homes.