This little guy is so cute.  Everywhere he has been, people have been in love with him.

Here's his story:  Apparently he jumped out of the back of a pick up in which his owner was taking him and his brothers and sisters somewhere (flea market perhaps).  He broke his right front leg.

He was so scared and in so much pain when we picked him up from the shelter.  He couldn't move because they had given him so much pain medicine (a good thing!) but he was still scared.  When I opened the box I could see the towel that he was lying under moving- he was wagging his little tail.

Well, we tried to figure out what we could afford to do for him.  We thought about splinting his leg (under vet supervision) but when we got his xrays back it showed a really nasty fracture that required a special surgery.   So we did what any normal person would do for a dog- call an equine surgeon!

Luckily she answered and she agreed to do us a favor and fix his leg.  I was there for the really difficult 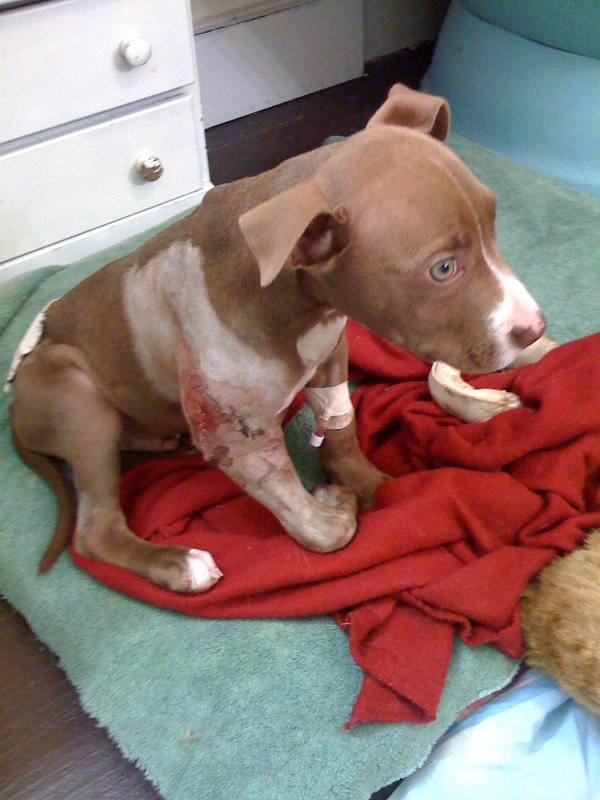 procedure and there was some cussing but it looks like it will heal pretty well considering how bad it was.  Last night, the night of surgery, he was in a lot of pain and was very anxious (he has been through a lot - lost his family, hurt his leg, had been shuffled through different shelter systems, and then was getting surgery).  By 10pm though, it was clear that his drugs were working and he was feeling better.

He started walking but just knuckled the newly fixed one.  We expect that to take some time to heal.   He went to his foster home today and luckily she is a behaviorist so we are excited that he can work on his anxiety while in her care.

He is just so adorable and I know that as soon as he is well enough, he will find his forever home in a heartbeat.