Update: Pothos was adopted by a family with another small dog and 3 cats. They report that he has fit right in with the rest of the pack and they're all getting along famously. 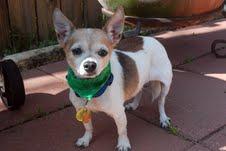 Pothos is an easy-going, low-maintenance, older gentleman looking for his new home.

Our rescue coordinators thought he was a portly little guy when they pulled him from the euthanasia list. It turns out that he had a tumor taking up almost all of his insides - 1/3 of his total body weight.

He had surgery to remove it and is now doing wonderfully (we believe  it was a benign splenic hematoma) and is looking for his new home. Below are the before and after surgery photos - check out how svelte he is now! We expect him to live a normal life after this. 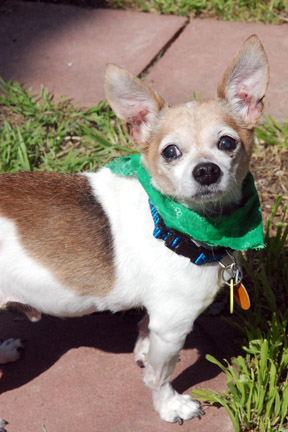 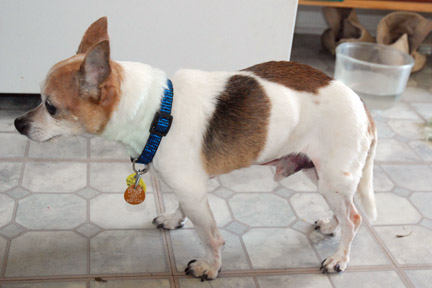 Here's some info about him from his foster:


He is fantastic with cats! My dog hating cat even slept next to him in bed. She doesn't even like to be in the same room as our own dog. I took him in the cattery with me when there were five cats, he didn't bother any of them.

He forms a very intense bond with his owner. After about 1 week, he followed me everywhere. I can't go to the bathroom without him coming in or waiting on the other side of the door. He is freakishly attached to me. I think the same will be true of the next person.

He is a great dog to snuggle in bed with. He sleeps right next to you.

Loves to take walks (short walks) and is great on a leash. He does a really cute little excited dance when you get ready to take him for a walk.

He likes little stuffed animals. Shakes them around and chases them if you throw it. Still a little playful.

No problems with other dogs, just a little nervous around them.

He has the funniest morning routine. He gets out of bed, goes out to do his business, eats breakfast, then crawls under his blanket to make himself a little napping nest. The process takes anywhere from 5 to 15 minutes, depending on how much construction is needed that day.

Here's video of him in his nest:
httpv://www.youtube.com/watch?v=xZC6wjxbPNg

His foster is going out of town soon and we'd love to get him into his new home before then. He'll be at the 51st Street PetSmart this weekend meeting new families.

We are raising money to cover the cost of his surgery, which was $500.