A dog can be a man's best friend. Or a woman's. Or an entire family's. But when it comes to picking out a family dog, would you choose a larger, older dog from a shelter to bring home to your children? The Rader family did just that and they couldn't be happier! 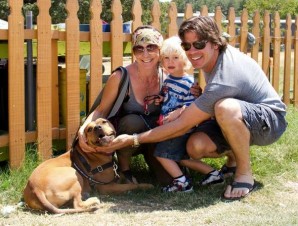 After a minor security scare at their home, Mike Rader and Kelly LaPlante wanted to find a dog who was an intimidating presence to an intruder but also a true family member and friend to their 2-year-old son.

"It seemed like an impossible thing -- to find those two qualities in one dog -- but we found that in Winnie," Kelly said. "Her breed looks scary and her bark is ferocious but she is great with kids and she and my son loved each other instantly. We knew she was the one right away."

After a 'love at first sight' moment, the Raders took 3-year-old Winnie home from Austin Pets Alive! and watched in awe as her previously timid and depressed demeanor transformed into a happy-go-lucky enthusiasm.

It was as if she knew she'd found her forever home.

As an added bonus, Winnie was already house-trained and her energy levels were easier to manage than if they'd chosen a puppy. The Raders admitted that it was a little daunting to get used to an extra 70 pounds gallivanting through their house, but they found a balance in no time. Winnie adores quality time with her family but her independent spirit allows her to relax and spend time on her own, too. 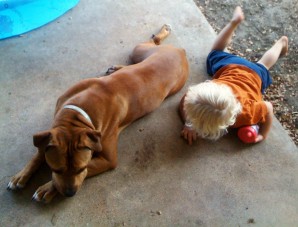 The best part about Winnie, Kelly said, is her relationship with their son.

"We had to put an end to her sleeping in his room because they were such a mischievous pair! We'd hear laughter in the middle of the night and find them both rolling around on the floor. He also just laughs with pure delight when she licks his toes.

"It makes Mike and I happy to see him so happy."

Kelly said they feel safer now that Winnie is with them, but more than that she brings them a lot of joy.

"I think there is a wonderful loyalty that comes when you adopt an older dog who really comprehends how lucky they are to have found a forever family," she said.

"She's been through a lot but she has a deep understanding and appreciation of family that a young pup would never have. She would do anything for us; I know that."