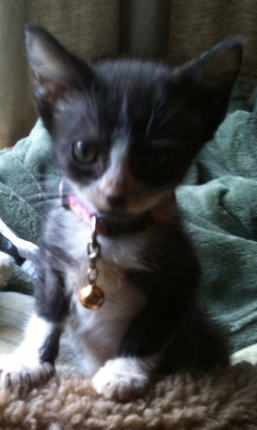 Thought I'd write an update on little Arizona. She mourned a bit after her sister, Alabama, crossed the Rainbow Bridge, but now she is THRIVING! She went from the severely underweight kitten labeled "Runt" on her intake paperwork, to a sweet little thing that struts around, plays, romps, and loves.

I brought into my home another litter of 3 kittens to foster that are just her size, with the goal of giving her company (and me a distraction). It took a little bit for her (and me) to get back into the swing of things, but she was soon running around & exploring with them all, and I was enjoying watching them interact.  The kitten that used to always keep to herself is now playing & nesting with the others and having a great time. Bringing in those extra foster kittens was one of the best decisions I could have made at just the absolute right time.

She hasn't completely figured out how to clean her face/nose after mealtimes too well, but she will always allow me to wipe her down with a baby wipe. She's very attached to people and if, while in the middle of kitten playtime she sees me watching her, she'll come over to me for pets and kisses. Arizona gives kitty kisses, too, and enjoys being close to where the lovin' is...smart girl. 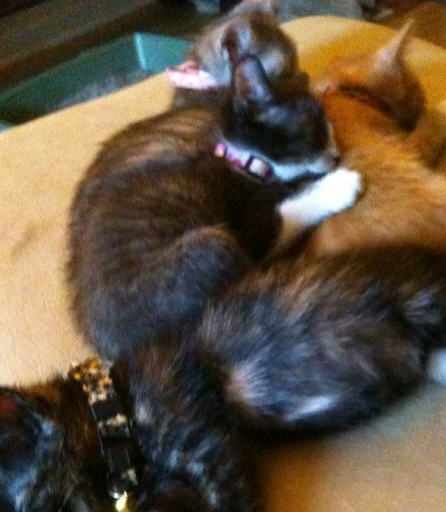 She now weighs a pound and a half and  has had her first set of vaccinations. I've been holding off exposing her to the stress that an adoption event can bring, just to be sure her immune system was as strong as possible, and she is *almost* ready to hit the road to a PetSmart somewhere (sniff!). I am NOT looking forward to that at all.

She is just so adorable, I almost can't stand it! In fact, I've been trying on new names for her (never a good sign for a foster parent to do that). And maybe it's just me, but I see a striking resemblance in both appearance & personality to...

DORA! So, yeah, I would probably name her Dora if I were to keep her. As sad as it will be to see her go, adopting her myself is not in the plans. I have put in the effort, as all foster parents do, for her to grow & thrive so she can bring joy to someone else's family. I've updated her pictures on the APA! website, and she is officially available for pre-adoption.