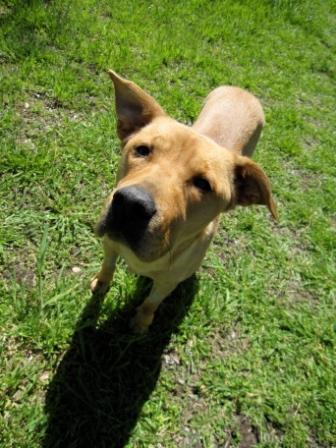 I'm so happy to write this blog post - it's full of drama, but with a happy ending.

First, to catch you up:
We found Reba at TLAC as a stray with a broken leg and hip, probably hit by a car. Even in terrible pain, she was the biggest love bug. No one came to get her and we didn't have a foster for her, so we spread the word and someone new came forward to foster her.

Once we pulled her, we removed 2 gallons of urine from her bladder - she didn't get up the whole 4 days at TLAC, and being housetrained, she held everything in those 4 days. She also had a high fever.

Her bladder recovered quickly with medication and antibiotics took care of the infection that caused the fever. She soon developed a cold, but that cleared up too.

Her foster reported that she loved people and got very excited to make new friends and see old ones. She liked to lean on her human friends (whether they are sitting or standing) and loved to be petted. She liked other dogs a lot, especially medium and large ones. She also enjoyed the company of free-roaming chickens and learned to tolerate friendly felines. Kids, though, were her preferred company.

Once the cold had cleared, we sent her for surgery on her hip and leg. Surgery went very well and Reba was on her way to a full recovery!

Except that she came down with a terrible case of distemper.

Her distemper progressed to the neurological stage quickly. She had lots of seizures - really bad ones. The distemper caused ulcers on her eyes and she became blind. Instead of being able to walk after the surgery, she now couldn't use either of her back legs and her foster had to carry her everywhere.

She was miserable. She had reached the point where euthanasia became the only option for her. One evening, Dr. Jefferson and Reba's foster decided to bring her in for euthanasia the next day. But that next morning, Reba started eating like a horse. So they postponed euthanasia by one day.

Reba continued eating, and while there were a few bad days in there, there were some good days too. Little by little, the seizures lessened and she started seeming happier and back to the girl she'd been before the distemper.

One of her eyes got better and she has sight out of it. But she still couldn't walk. Her foster could have sworn that she would see little movements out of the legs, though, and didn't want to give up. So she started learning t-touch and set up an appointment with a physical therapist.

Here is Reba "walking" on her two front legs, dragging her back legs behind her:
httpv://www.youtube.com/watch?v=aV5btapWbWU

Here are some notes from her foster after her physical therapy sessions:


6-10-2010
today was a great day for Reba!
We saw Sandra Hudson today. She worked with Reba on a peanut stability ball, on a board with a curved surface underneath, and on the underwater treadmill, plus checked her muscle tone and responsiveness.
Reba was AWESOME. Once she got comfortable on the stability ball, she really seemed to enjoy it. In the water, although she seemed really frightened, she walked and moved both of her back legs for most of the time she was on the treadmill! After all the exercises, she was even more stable standing unassisted--really amazing.

(Here is Reba in the pool:)
httpv://www.youtube.com/watch?v=9z2a9ruDr6E

Sandra thinks that her chances of regaining mobility given what she saw are really good. She would like to see her as often as possible--said that 5x/week would be optimal but 2 or 3 x/week would be ok as long as I can spend a lot of time working with her in between--that once a week would really not be enough.

Here's the best part--we got home and she cocked her head, asking me to scratch her right ear--then she started moving her right foot towards her head!!! She couldn't make it to her head but it was so amazing--the first time she has voluntarily moved one of those limbs outside of being stood up. So cool!
I feel real hope for this girl now--what a miracle this would be. 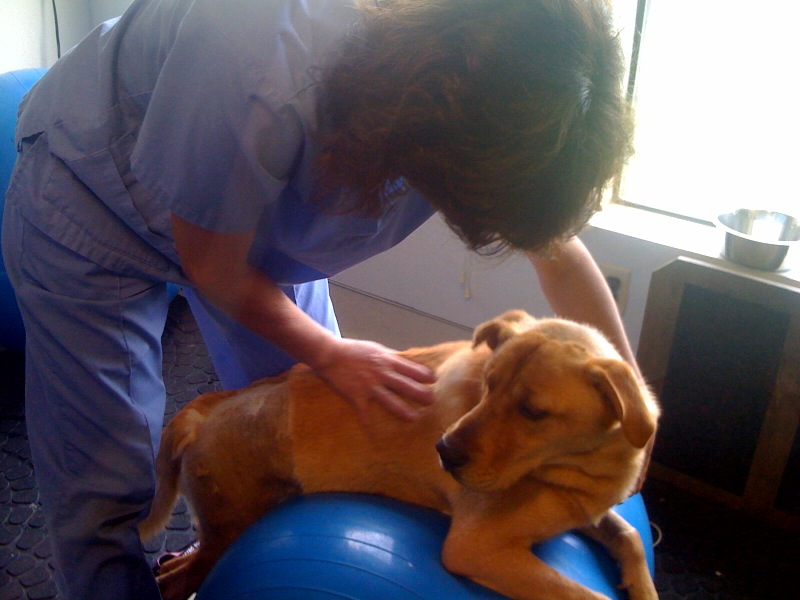 Reba continues to work hard at her rehab. She can now do 20 minutes on the underwater treadmill and keep her gait almost the whole time! We do exercises at home several times a day--she doesn't like them, but is fighting it less. (When I can rope a neighbor or friend into helping it goes much more smoothly.) We practice standing, which she can't really do unassisted but only needs a little support at this point, put her over a stability ball and pulse her up and down, and put her back legs on a balance board in two directions for about 15 repetitions of the board going up and down.

Sandra Hudson was able to arrange for her the loan of a good quality cart today, and we just got back from our first walk ever in the neighborhood. She seems so excited to be able to be upright and move fairly freely! In the cart, she makes walking motions with her back legs, but her back paws barely graze the ground. Here is some footage of her first 'walk' in over 3 months, since she was hit by the car!

So it appears our Reba is on her way to having her happy life back. We can't thank her foster enough for everything she's done for her.

Needless to say, the bills have stacked up for Reba. The surgery ($1,000), distemper treatment ($400), and physical therapy ($400, thanks to a huge discount from her physical therapist and a donation from her foster) total $1,800 and we need help paying for it!

We're asking our supporters to donate or spread the word about Reba so we can continue with her physical therapy and help more dogs like her. Thank you to everyone who has already donated for her care and to the volunteers who have helped her.