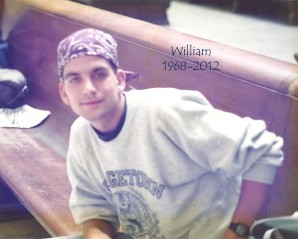 Just over a week ago, a former Austin Pets Alive dog counselor and extremely dedicated volunteer passed away. We are shocked and saddened by William Lanier's death, and send our deepest condolences to his family.

There was not much William wouldn't do for APA and the animals. He seemed to love his job, and more importantly, love caring for the dogs. As his co-worker put it, "He would be out in the yards picking up poop with a huge grin on his face." We are so grateful to have known him and had him on our team. He will be greatly missed, and always remembered.

"William was such a sweet guy. He knew something a lot of people go their entire lives missing, that the best way to show love and care can be to get on your hands and knees and work. Early on in volunteering he wrote a poem about APA, & the only line I can really remember said something about "love has two hands". I think that stood out to me because it was so consistent with who he was at APA..."
--Lindsay H.

"He did a lot for the dogs even when he was a volunteer. I remember he would take the bus to HQ just to help us clean the puppy poo off the balcony, and he would come in between his massage jobs to give treats to all the dogs. I remember him telling me about how he was in the army at one point and had stories from that. He really was a kind guy, really dedicated, and kind to the dogs."
--Kelly S.

"He was such a kind and gentle person. He really loved the animals and was willing to do whatever was asked of him. He had always said he wished to win the lottery so he could give APA all the money that it needed!!! There wasn't a time that he came by without telling us that he appreciated what we did day in and day out as counselors and people deeply invested in these animals. He will be sorely missed in the world..."
--Aaron C.

"He used to LOVE the big dogs, and he was the best puppy cleaner in the world!  Always smiling...William was a really good egg."
--Holly L.

"I was always happy to see William when I was at APA. He went out of his way to greet everyone and thank everyone for their contributions to the no-kill movement in Austin. He always stood out as someone very special."
-- Gretchen M.

William's poetry book has been published and is available for purchase here.  Use promo code MBLTLGNM for a $10 discount.  All proceeds will be donated to Austin Pets Alive! and suicide prevention organizations.