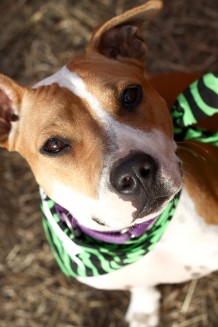 Jenn was busy trying to make sense of her chaotic reality last September when the threat of fire forced her and many others to evacuate their Bastrop shelter.

The frightened 40-pound pit bull terrier mix, blanketed in fleas and anxiety, was included in a rescue mission by Austin Pets Alive!, who sent volunteers to collect all of the dogs and safely transport them back to Austin (earlier that night, the Austin Humane Society rescued all of the cats and some dogs).

Without the guidance of a loving family for her first two and a half years of life, Jenn was frightened and unsure what to make of, well, everything.

She was petrified of other dogs, the car ride to Austin and most fast-moving objects.

She hadn’t been taught the purpose of a leash, so tugged and pulled anyone who attempted to walk her and destroyed nearly every harness in her path.

When someone entered her pen, Jenn burst with her bottled excitement and barreled into her visitors, giving them “love bites” to say hello.

It didn't mean that she was a bad dog, though. Despite her behavior challenges, staff and volunteers adored her. Jenn was a happy, spunky, misguided soul who simply needed to be shown the right path.

That path graciously began with volunteer Nguyet Chau, who said she connected with Jenn from the moment they saw each other. The pair worked consistently on loose-leash walking, jumping, mouthing and Jenn’s fear of other dogs and moving vehicles.

To combat her anxiety related to riding in cars, Nguyet even took Jenn on trips to Wendy’s and Sonic for ice cream -- an activity Jenn quickly learned to cherish.

Five long months later, Jenn’s behavior had drastically improved. So much so that a family took her home with them.

And then brought her back.

And so Jenn waited, never showing signs of depression but simply accepting whatever reality came her way.

It was Brian and Angela Behm who gave her a real chance.

“When we met her, she greeted us happily -- licking us and wagging her tail,” Angela said. “The adoption counselor said she was surprised because she didn’t do that with everyone.” 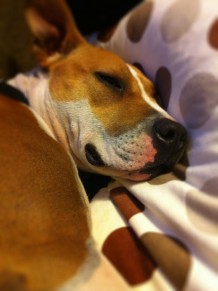 Angela grew up with pets adopted from a shelter, including an adult Husky/German Shepherd mix, so she was comfortable around larger dogs that might need extra work.

Jenn, now Asta, worked hard to figure out her latest confusing reality in a home environment. She worried that her family wouldn’t come back for her and often tried to escape through the front door.

Once she learned her new routine, however, Asta relaxed in the comfort of knowing that her family would come home to her in the evenings.

Brian and Angela have enrolled Asta into a four-week training class and are thinking about getting her involved in dog-friendly sports, based on her high energy levels.

They’ve also learned to keep her mentally stimulated with puzzles and frequent games.

“She loves fetch, tug-of-war and chasing a soccer ball,” Angela said. “On weekends we like to walk her to one of the nearby restaurants with a patio to have breakfast.”

The couple have fallen in love with Asta’s playful, loving nature and enjoy laughing at her antics.

“Sometimes she’ll jump up on the couch and roll with her tummy up and legs in the air. If she’s not paying attention she’ll roll around so much that she’ll fall off the couch! She just shakes it off, jumps back up and does it again.” 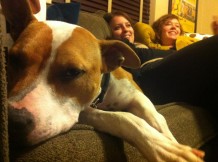 Angela says with the right attitude, anyone could rescue a dog like Asta.

“If you fall in love with a dog and are willing to put in the effort that dog needs, the unconditional love you get in return is more than worth it.”

Looking at that face, we couldn’t agree more.