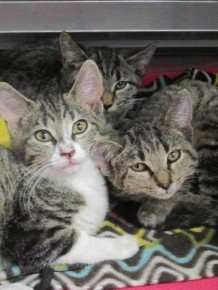 First things first: Ringworm is not a big deal! It is actually just a fungus like athlete’s foot, and it goes away within weeks without any lasting effect. Ringworm kitties are exactly like non-ringworm kitties, except that because ringworm is communicable, they have to be sequestered until the ringworm clears up. We have a place for that at Austin Pets Alive! – Dazey’s Ringworm Ward!

Glenda, Holden, India, and Fergus were a litter of 9-week-old kittens that came to Town Lake Animal Center with a pretty bad case of ringworm; plus, they were painfully shy. There were no socialization fosters at APA! who were able to take ringworm kittens, and no ringworm fosters who could take on a socialization case. Our small, all-volunteer team was approached by the APA! cat behaviorist about taking them directly into our program, and we enthusiastically accepted the challenge. We affectionately nicknamed the litter GHIF.

When GHIF arrived, they were a huddled, terrified, quivering pile of brown tabbies with bald tails, ears, and feet. The slightest noise or motion sent them racing into a corner, and even the gentlest touch made them tremble with fear. We quickly got to work, administering oral anti-fungal medication, twice-weekly sulfur 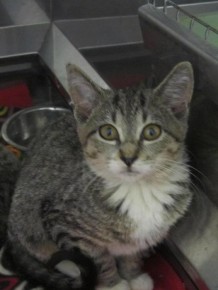 dipping, and a whole lot of TLC.

As GHIF’s physical conditions began to improve, their personalities blossomed. Instead of rather rat-like tails, a layer of fuzz had begun to grow, and instead of hiding if someone even glanced at them, they greeted our volunteers with instant purrs and requests for snuggles!! They became some of the sweetest, most gentle and affectionate kittens we have ever had in our program.

Then Dazey’s Ward moved to our new location (the now APA!-run TLAC), which gave us a lot more visibility to the public. Glenda was soon adopted with another one of our ringworm cats! Then a sweet woman came to look for kittens, and had decided to adopt Holden and Fergus when one of our volunteers mentioned they had a sister, India. The woman had two sons and a daughter, whose personalities amazingly matched those of the kittens! The three kittens were welcomed into their family together.

Glenda, Holden, India, and Fergus are now all happy in their forever homes, and serve to inspire our team and remind us of the amazing things that can happen when we treat the whole cat, not just the fungus. 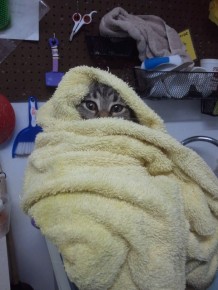 To top it off, in the three months after GHIF's adoptions, Dazey's Ward has successfully adopted out all of the cats and kittens with active ringworm!

Now with summer approaching and kitten season in full swing, we need help in Dazey’s Ward! Are you interested in a volunteer position where you really get to know and love the cats and kittens? Volunteer duties in Dazey's Ward range from giving medication, cleaning, scooping litter, or just giving our kitties some love! Email [email protected] today.

For more information about ringworm and our program, please see our Dazey's Ward page.