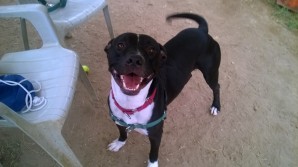 Almost every dog and cat at APA! has a hopeful story of how they turned a corner and found a joyful life. Rashid is one such dog. He came to APA! deathly ill with parvovirus where he was depressed and downtrodden. But here's what one of his many fans had to say about him now,


"The first thing that stood out to me about Rashid was his happy hopefulness. It is entirely understandable that spending so much time cooped up in a kennel in a shelter environment leaves many dogs heartbreakingly sad. But Rashid exuded joyfulness from the moment I set eyes on him peeking over the siding on his kennel door with sparkling eyes and his tail swiftly wagging. He clearly wanted to get out of his kennel, but he seemed to have faith that would happen. He had no indication of despair, just eagerly waiting.

That first impression was just a hint of the lovely soul I would soon get to know.

I quickly discovered Rashid has enthusiasm coupled with a gentle sweetness. He happily explores one minute and is lovingly trying to get his fifty pound body gingerly into my lap the next. I could not help but be charmed by this special boy.

I became even more enamored with Rashid when I learned he had not always been the vibrant, cheerful dog that I now know. After posting pictures of him on the APA! dog volunteers Facebook page I heard from volunteers who had been touched by Rashid during his early days at the shelter. I was told he had been deathly ill with parvo. One volunteer said she especially remembered Rashid because his spirit seemed so broken when he was sick. She would stay with him after his treatments and he would curl up in her lap while they watched TV on her phone. Another volunteer said that Rashid was so small after going through parvo that he fit into her lap. After completing treatment, Rashid found the chaotic shelter setting frightening and initially experienced kennel anxiety.

Rashid's congenial and carefree temperament is a powerful testament to the care he received from dedicated volunteers as well as a reflection of his innate resilience. The affection and warmth he so willingly gives make him easy to love.

His ability to bounce back so beautifully from a very bleak beginning makes him truly remarkable."

Rashid may have found his inner spirit, but he is still searching for the perfect forever home. Dogs and cats like Rashid remind volunteers and staff of the compassion and hope that is possible in life.

If you're interested in adopting Rashid or volunteering with these beautiful creatures, don't wait. Contact [email protected] for information on this gorgeous boy or find out more about volunteering with us online now.