The Next Internet Sensation

...brought to you by your local animal rescue 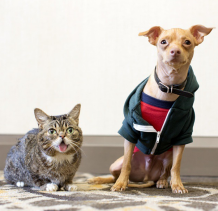 This moment struck a cord with everyone at APA!. Here's why: These two ultra famous animals mean so much to the no-kill cause... but do their star struck followers realize it?

Lil Bub is a polydactyly cat with dwarfism and multitude of other genetic anomalies and Tuna is an endearingly snarky Chihuahua with a pretty significant overbite. In many cities, these particular animals would have been euthanized for the very same reasons they are so famous. Slight "deformities" and less than perfect manners are more than enough reasons for many shelters to put an animal down... and not because they want to, but because these animals are so regularly overlooked. 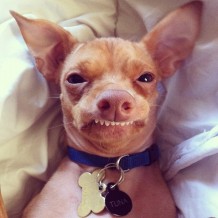 But Tuna and Lil Bub (among others) should be an example for the lay pet purchaser: the "highly adoptable" types are not always the animals that will truly capture your attention. Millions have fallen in love with these web sensations and yet between 12 and 20 million animals just like them are put down each year. Meanwhile, 80% of new pet handlers choose not to  rescue.

Thankfully, Lil Bub and Tuna know the power of their celebrity and do what they can for the rescue community. They know, we know and you know that love for an animal doesn't always come prepackaged in the perfect fur coat and evenly spaced facial features.

It comes in six toes, overbites, an awkward bald spot behind an ear, weirdly shaped jaw bones and nubby tails.

It comes in the shy approach of a fearful dog, the singularly focused devotion of a 16-year-old cat, the hopeful eyes of an animal who needs your help to go potty.

It comes in the places and the moments you least expect it.

The millions who have "fallen" for Lil Bub and Tuna prove just that.

How do you think these internet sensations play a role in no-kill?

Did you find love for an animal in an unexpected place? Tell us about it.