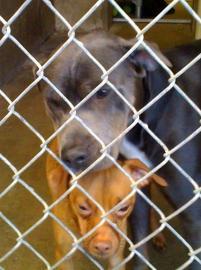 Perhaps you have seen the pictures of Oscar and Felix on our website and thought ‘what an odd couple of dogs to be friends.’ At first, we thought so too! But with these two dogs you really do get the perfect combo of feisty leadership and a shy, sweet demeanor. They are like two peas in a pod…well one pea is just a lot bigger than the other.

Affectionately dubbed’ the odd couple’, these lovable pups are just that. Felix, a chihuahua mix happens to be the leader of the bunch. Don’t be fooled by his small size, he takes really good care of his little brother Oscar, a blue pitbull/terrier mix. Sweet Oscar is just 10 months old and relies on Felix to take care of him.

It is amazing witnessing the loving bond the two dogs have with each other. Separating the two would be just heart-breaking.

These two babies were found living on the streets together and dropped off at Town Lake Animal Center. They were both rescued, but since Oscar was sick, they had to be separated temporarily.

Felix arrived at his foster home first. His foster parent describes him as sweet and cuddly and always ready for a walk or to curl up and take a nap. He is a great dog and extremely happy doing just about anything. He follows her around everywhere and sleeps under the covers at night, curled up around her feet.

Oscar came to the household a week later to be reunited with his pal. When he was first picked up, he looked miserable and sad with his tail tucked between his legs.

Upon entering the house, Felix greeted the door as usual to find his ol' pal Oscar. They sniffed each other for a few seconds at the initial greeting. They then spent the next 30 minutes leaping and playing, with their tails wagging with excitement.

Once they calmed down, Oscar was a completely different dog. He was happy, energetic and extremely friendly. From that moment on, Oscar and Felix were never more than a few feet apart from each other. 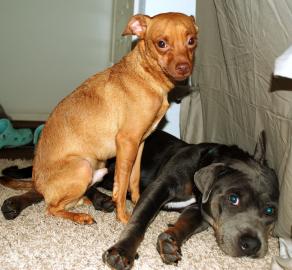 If you are looking for a pair of loyal, smart, sweet dogs to cuddle up to, this pair is more than willing to share their love with you. By adopting these sweet pups together you would be making an enormous difference in their lives and keeping them from the devastating possibility of being separated forever. They are a family and they want nothing more than to find a loving home together. Please open your heart up to them this holiday season, you will get double the love in return.