The One Man Marathon

Back in September, Rob Hill of Team Spiridon started training a team of runners for the Livestrong Austin Marathon and Half Marathon on February 20.  Team Spiridon is a member of the 26 Miles for 26 Charities program, and raises funds for Austin-area animal welfare organizations like Austin Pets Alive!, Emancipet, the Austin Humane Society, Animal Trustees of Austin, and others.

Patton said, "Always do what you ask of those you command."  So, Rob did all the same training he put his team through, even though he'll be helping "run" the event on race day, and can't run the marathon itself on the 2oth.

Instead, on Sunday, February 13, Rob Hill ran the full marathon distance on his own.   Austin Pets Alive! dogs Addison, Red, Paris, & Hannah ran with him in full support and got him through the grueling 26.2 miles.  He has raised over $1100 for Austin Pets Alive, EmanciPET, Love-A-Bull, Inc., Austin Humane Society, and Animal Trustees of Austin through this run!  You can still donate in honor of his efforts here.  Thank you, Rob, for running with our dogs and raising money for the fur babies at APA and congratulations on finishing your marathon in first place!

Come meet some of our more active dogs and Rob himself at the 22nd mile water station of the Austin Marathon (Sunday, February 20th from 7am to about 2pm).  The water station is located on the corner of 51st and Guadalupe.  We hope to see you there!


[caption id="" align="alignnone" width="300" caption="For each leg of his marathon, Rob ran with a different Austin Pets Alive! dog. Here he runs with Paris, a cutie in need of an active adopter."] 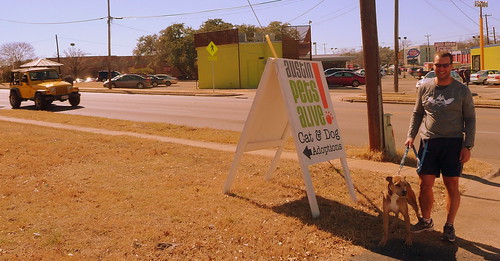