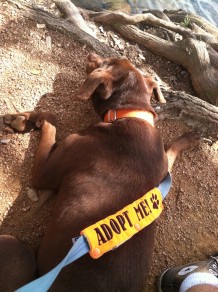 Chuck checking out stand up paddle boarders and kayakers on the lake.[/caption]

I'm a few weeks away from my 1 year anniversary of volunteering at APA! I started as a Rufftail Runner on July 14, 2014. Most of what I do at APA! is RTR, and that's what this post is about.

The Rufftail Runner (and Walker since there are usually more walking dogs than running dogs on the list) program is in its 5th year and continues to provide excellent benefits to the dogs. There's the break they get from TLAC, the exercise, the chance to meet new people and show off skills, and the playtime. Swimming in the lake and rolling in the grass bring out big, wide smiles in so many dogs. Regularly encountered squirrel playtime companions provide bursts of excitement while occasionally encountered turtle playtime companions inspire Rubik's Cube like fascination. 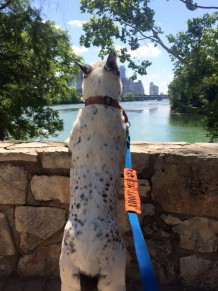 While all dogs benefit from some time on the trail, the shy and fearful orange collared dogs may get the most out of it. These dogs really open up once they get out there. I've seen it time and time again. But don't just take my word on it. Here's what Heather Jafar, the person responsible for trail testing of those dogs to make sure the trail is right for them, has to say.

Here she's speaking to fellow RTR Jason Saul:
"Your (Jason's) work with Chiquita is a wonderful example of how trail time can truly rehabilitate a scared dog. You might not have been here 2 years ago, but Chuck was just as scared as Chiquita on the trail back then, even more. Now he's the most confident RTR we have on the team. It's all because he got experience, just like you are doing with Chiquita. This is going to help her get adopted and stay adopted."

Because Heather believes in this program so much, she has created an Orange Rufftail Fitness Challenge: 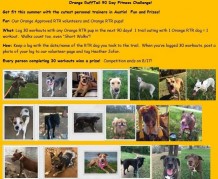 This challenge runs (pun intended) until August 17, so there is still plenty of time to complete it. And while I will gladly take any prize offered to me, the real prize is seeing the joy these dogs get out there on the trail.

Recently I've noticed more and more regular APA! volunteers taking the RTR class so they can take dogs out of TLAC and onto the trail. I think this is great! How many other dog shelters in the country are right on an incredible city trail? The location of the TLAC branch of APA! is a gift. A gift we can share with so many of the dogs who would otherwise spend all of their days and nights at that shelter. If everyone reading this (hopefully there are more than 3 of you) took one dog out on the trail one hour a week, it would make such a huge, positive impact on their lives.

See you on the trail, with a dog!