The Positive Reality of Volunteering at APA! 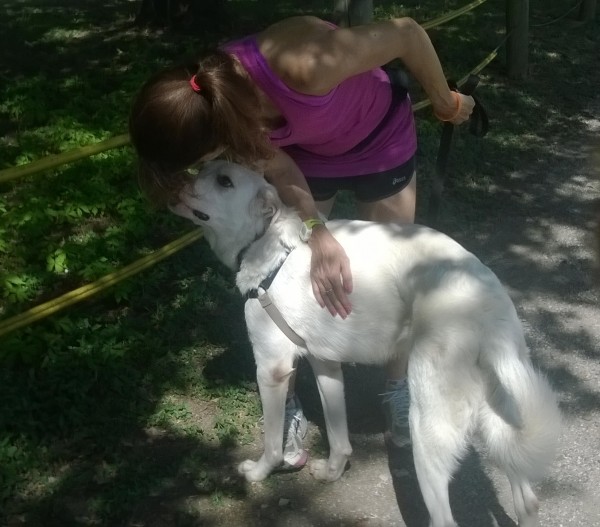 I've heard people say that they could never volunteer at an animal shelter because it would be so depressing. Being around all those homeless animals is just too sad, they say. A few summers ago I began volunteering at APA! and discovered there couldn't be anything further from the truth.

It was May, 2014 and I was looking for a summer activity I could do with my daughter. I came across the Rufftail Runners Program which allows volunteers who attend a short orientation to take APA! dogs for a walk or run around the lake. The thought of getting exercise with my daughter and giving a dog a break from the shelter at the same time sounded like a winning proposition. Also, as a lifetime cat owner, I was intrigued by the idea of spending time with dogs. I decided to give it a try.

I'll admit I was a bit apprehensive as I closed the kennel door behind me for the first time and was mere inches away from a blocky-headed pit bull in a very tight area. I was a stranger to this dog and I was invading the little space he had. I couldn't blame him if he didn't want me there. Why was I doing this again? I was so nervous as unsettling thoughts crossed my mind that my hands were shaking. 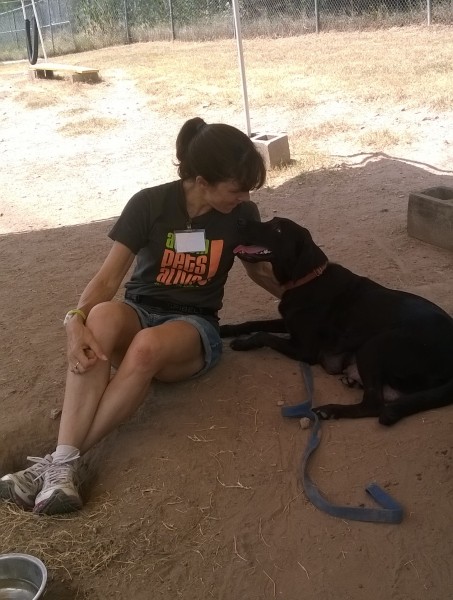 But, after just a few moments my worries vanished. This dog's eyes twinkled with happiness and he seemed to be actually smiling as he patiently sat waiting for me to put on his gear. I was so touched by the way he absolutely trusted me and his obvious gratitude and excitement simply because someone was giving him attention were sweet and poignant. My goodness, he was sure adorable! I could feel my heart start to melt. Our time around the lake was carefree and fun and I felt a special connection between us. As I left the shelter that day I was profoundly moved by that joyful dog who wanted nothing more than a person by his side. I couldn't wait to come back and do it again.

I've lost count of how many dogs I've spent time with since that first day. Some of them love to run and chase balls, others crawl into my lap and savor the feeling of having someone near them. Each one has brightened my day and impressed me with their unique charm and hopeful spirit. 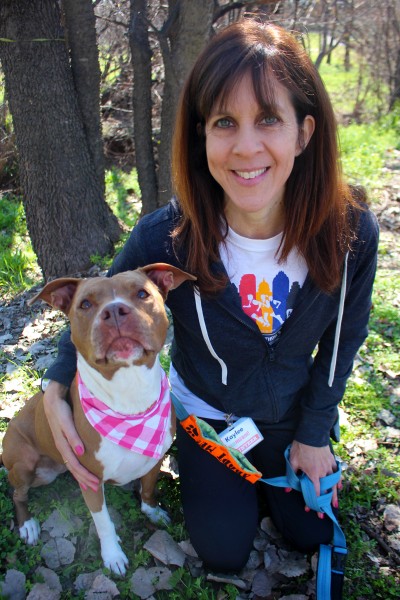 Now I always look forward to opening that kennel door. I know it means a new and special connection will be made or an existing one will be strengthened and we'll both be enriched because of our time together.

My volunteering has expanded to include the APA! cats, another engaging group. I've found volunteer opportunities that I can do at the shelter or from home. It's very rewarding contributing what I can and knowing that the cumulative efforts of so many other volunteers doing the same leads to truly remarkable results.

Volunteering at APA! has proven to be a positive experience and so much more. Inspiration, new beginnings and beautiful moments abound, unconditional love is plentiful and knowing a precious animal is better off because I took the time to care lifts my spirits every time.
By the way, that very first dog I walked, named Reveille, now has a loving family of his own!