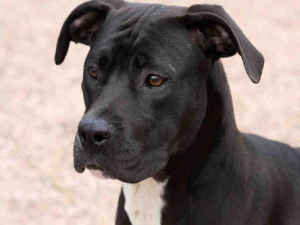 The APA! trail site on Lady Bird Lake is a wonderful place for our active dogs to get out and about for some fun and exercise!  It also provides a much needed respite from shelter life for the longest-stay dogs in Town Lake Animal Center's adoption program.  The trail site serves a third purpose for APA! and TLAC dogs as well; it is a place where frightened dogs can come and get attention, socialization, and help from an army of caring APA! and TLAC volunteers.

The story that follows is that of one of these frightened dogs.  Pogo has gone through a wonderful transformation at the trail and her story is full of hope.  It's not finished yet, however.  Sweet Pogo has been at the shelter since March, a shockingly long amount of time, and we need to find her home. 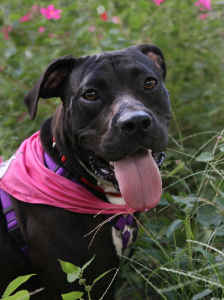 Seeing the gorgeous, confident dog Pogo has become, it's almost impossible to believe that she came to the shelter too frightened to even accept a gentle hand reaching out to touch her. To quote one of the TLAC volunteers who's invested a lot of time and love into helping Pogo, "If she could have been invisible, she would have." The first time Pogo came to the APA! trail site, her tail was tucked so far under it was actually touching her belly. She would shake or cower if you went over to say hello to her. Even stinky, yummy sausage treats couldn't lure her in.

But through her fear, Pogo was certain of one thing. She LOVED walking on the trail. When one of the TLAC trail dog volunteers came to take her out, she overcame what was holding her back and stepped out for her walk with the gait of a much different dog. Walking the trail was her safe place and the highlight of her day. It was also, quite possibly, the highlight of her life. It seems clear to everyone who has spent time with Pogo that she was likely mistreated or abused in her past home. But this amazing girl is a shining example of the resilience, strength of spirit, and capacity for love and joy that exists in our canine friends.

A few weeks ago, something extraordinary happened at the trail site. Pogo was there as usual, along with a younger pup named Girlie. Girlie had come to the shelter just as frightened and likely as mistreated as Pogo had been. She too, was trying her hardest to be invisible. It was Girlie's second trip to the trail. Her first visit had been just for socialization but, today, the trail dog volunteers had worked with her enough that they felt she was ready to go out on her first walk. Girlie wasn't so sure, but Pogo was.

It seemed that Pogo recognized what Girlie was going through and decided to take her under her wing. It was decided that Pogo would accompany Girlie on her first walk and, for those of us watching, there was a palpable feeling of hope in the air. Pogo was teaching Girlie that people could be safe and that, sometimes, when you overcome your fear, something really good can happen. The two of them took off side by side down the trail, Girlie following Pogo's lead and gaining confidence with each step. By the time they returned to the trail site, both dogs were smiling and relaxed, plopping down in the splash pools like they owned the place and accepting treats and snuggles left & right.

A dog as special as Pogo should not have to wait for her home for as long as she has. Pogo is one of the two longest-stay dogs at TLAC right now. There is speculation that she's not adopted because she suffers from some of the same silly stereotypes that sometimes work against shelter or rescue dogs. In Pogo's case, she was born with the dreaded "3 B's." Big, Black, Bullybreed. Three silly words that have no meaning for a dog and shouldn't mean so much to people. As soon as you meet Pogo, it becomes clear that the only "B" adjective needed to describe her is beautiful, both inside and out. 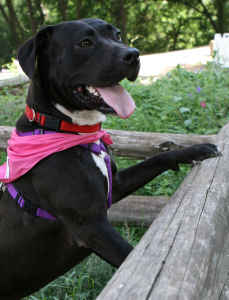