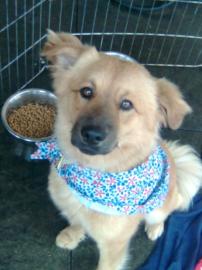 Update 4/18 9pm:  Tucker dug under the fence tonight and is loose again.  He's in Leander, possibly headed south again.  Please let us know if you see him.

Tucker was dumped in a neighborhood off of Slaughter and Manchaca several months ago, neighbors (Gary specifically) saw him getting pitched from a moving truck (on Chisholm Lane). He hung around there and got in a bunch of trouble, impregnating a family's dog and killing their chicken.  At first that family tried to run him off with b.b. guns. Then they called animal control but AC wasn't able to catch him.  The family finally was able to capture him using a baited trap and Tucker ended up at TLAC.

We pulled him on 2/10 from the euth list TLAC.  He was sweet but extremely scared.  We adopted him out to a lady on 2/20, she lives close to the Brodie Petsmart. He got away from her almost immediately (slipped from the collar, as she was taking him from her car to her house right after adopting him). We put up flyers, CL ads, etc but no sight of him.

In March we heard from that same family on Chisholm, who said Tucker was back on their property (that's 7-8 miles away from his adopter's home), but really wary now, not falling for baited traps. He was killing their chickens again and scaling 4 foot wire fences very easily. Their neighbor, Gary, an old retired Hollywood stuntman, started to try to make friends with him.

We heard back on 4/1 that Gary had finally been able to tame Tucker to the point that Tucker trusted him and would allow him to pet him, put a leash on him, etc. Gary loved Tucker, however, knew the neighbors would never let him keep him, so on 4/4 we went to pick him up. Gary had to pick Tucker up and place him in our car because Tucker was extremely agitated.

3 days later, on 4/7, he got away from the adoption counselor at our adoption site at 51st and Mueller. We did flyers, CL ads, but were not optimistic. Gary, in the meantime, was contacting us. He was trying to see where Tucker was going to be each day so that he could go by and at least walk him at one of our adoption sites since he missed him so much and was wracked by guilt of having to turn him back over to us and, as Gary puts it, 'betraying Tucker's trust in him'.  Our volunteer says she avoided his calls for a couple of days, trying to figure out what she could tell the poor guy that wouldn't break his heart.

This last Sun, 4/11, Gary called her, she picked up to do her best at explaining that we didn't know where Tucker was, but he told her that Tucker was sitting on his porch. Tucker had made his way back to Gary, that's over 13 miles, over IH 35, Ben White, and the river.

As much as Gary would love to keep him, the neighbors have informed him that if they ever catch site of Tucker on their property again they will shoot him, and that they will never feel at ease with Tucker next door, regardless of what type of restraining measures Gary takes to make sure Tucker stays on his property.

We're very happy to have the chance to help Tucker find a real home where he (and the poor chickens) can be safe and feel secure. Tucker is very soft and sweet but can be scared when meeting new people or in new situations. He's a lover who's never so much as bared a tooth but he does back away at first until he knows he's safe. Life on his own was a challenge and it's lucky that Tucker had the wits and quick reflexes to make it through his dangerous puppyhood. Now what Tucker needs is someone to love him and show him the kinder, gentler side of life. Of course, it would probably be good if his adopter appreciated his mischievous streak too!