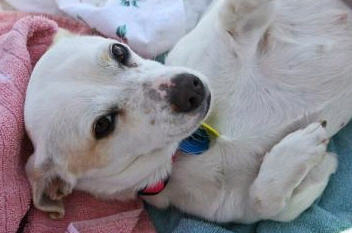 A year ago, on March 1st, I adopted a sweet dog from APA! named Sugar (formerly "Lovey"). She was shy & timid & submissive, and had been on the euthanasia list at the shelter. Once accepted into the APA! adoption program, she spent most of her time at the adoption sites hiding under blankets. But for some reason, when she finally poked her head out, her blonde hair & freckles really stole my heart. When I took her out for a short "test walk" she didn't do well on the leash. Still, I just knew I needed to welcome her into my home.

Sugar showed some separation anxiety almost right away, and so I enrolled us in some basic obedience classes. I also bought a crate, which she took to really well. It became her "safe place" (and still is). I also started taking her with me when I went running, and her wide smile and excitement told me she enjoyed that. It helped release her nervous energy and calmed her.

We even participated in a few races together, and she did really well. We also made more public outings, including farmer's market Saturdays and even a kayak ride or two. 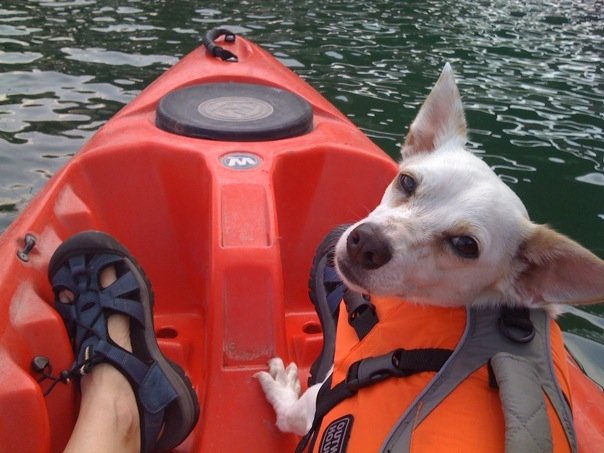 As her confidence continued to build (and mine as a new dog owner), I just knew she had something special to offer our community...not just to me.

A couple of weekends ago, I decided to have her tested for the Therapy Dog certification through TDI. I honestly didn't know how we would do on the test, but I knew her confidence had drastically improved over the last year and it was worth a shot. At a minimum, I figured we would come away with a few things to work on & we could take the test again in the future. For the certification test, dogs must demonstrate confidence and control while completing 15 separate exercises.

When we arrived at the dog ranch for the test, I was slightly intimidated. Other owners were practicing various advanced obedience moves, and while watching the German Shephard, Lab, Golden Retriever, Poodle, and Border Collie, Sugar and I weren't sure what we were in for. Sugar was the only mixed breed there - the only shelter rescue. Still, we had made the drive to the ranch, we had committed to taking the test, so we were going to give it a shot. 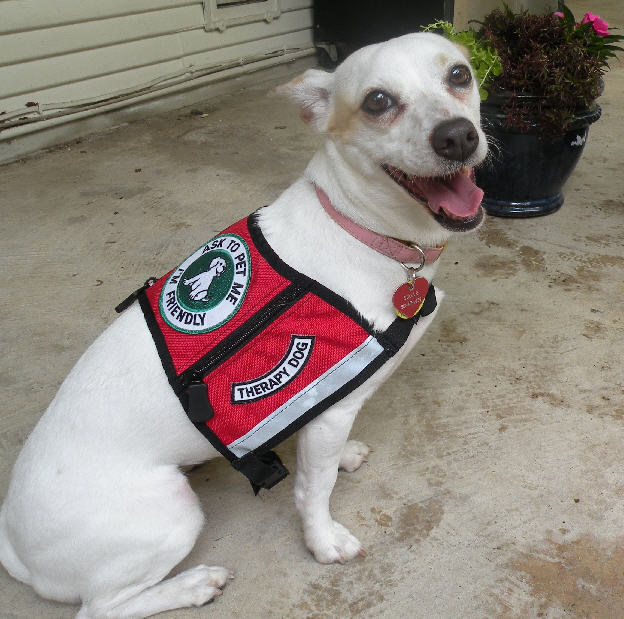 And I'm happy to say that she passed with flying colors! She also earned the AKC's Canine Good Citizen designation. I have never been more proud of her, never happier that she was rescued from euthanasia, and I have been beaming ever since. This is the ultimate vindication for her that the right decision was made to pull her from the shelter and that her life was worth something. I would have never had a chance to see her on the APA! website, and then meet her at an adoption event. I would have never gotten to enjoy her company, snuggle on the couch, enjoy a long run together, or feel the sense of pride that I have as she has learned to be so well-mannered. And she would have never had the chance to be the dog she was meant to be. She is like so many dogs that are still at risk at the shelter because of over-crowding or behavioral challenges. No-Kill does not mean that all dogs are now safe...not yet.

I hope everyone out there considers rescuing a shelter dog. Because the dogs' (and cats') lives, and what they can give your family and/or contribute to the community, are always worth it.

My exposure to APA! during Sugar's adoption process led me to volunteer, and now I work with the Bottle Baby program. Sugar loves having the kittens around, and plays the role of "momma cat" quite well. 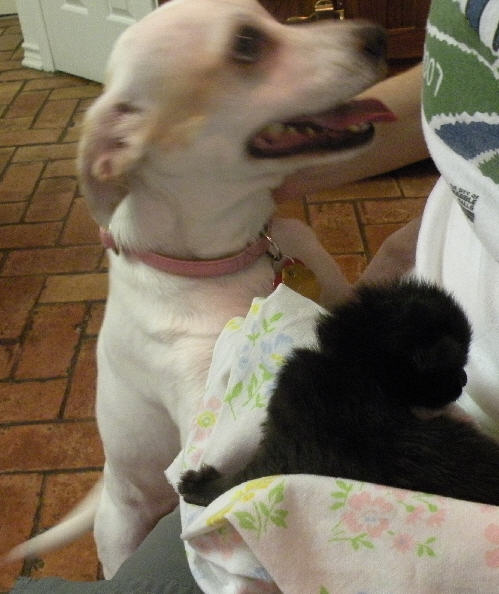