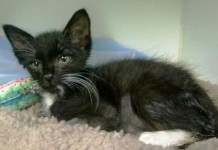 A good samaritan came by the Austin Pets Alive! triage clinic tent during the Bastrop relief efforts with a small kitten he rescued, asking for directions to the Bastrop shelter.  Due to this small kitten;s age and condition, APA took him into the program immediately and Dr Jenna Watley treated Underdog's eye, which was irritated from fiberglass insulation particles in it.

Underdog was then placed with a nursing mother and while he wouldn't nurse on him, she took care of his grooming and the foster fed him.  However, after several days, it was noted that his belly was swelling so his foster took him to the APA veterinary clinic where the vet team learned Underdog was extremely backed up.  Surgery had to be performed and another surgery may be necessary due to all the infections and blockage Underdog is dealing with.

Despite all this trauma in his young life, little Underdog is still very active and playful.  Would you consider making a donation towards this little kitten's care?