Valerie had always been the proud pet parent to smaller dogs under 30 pounds, adopting them and raising them from puppies. That’s why when a 'featured dog' post on APA!'s website caught Valerie’s eye, it also caught her by surprise. 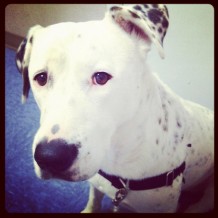 "A lady on a leash," it said. Delilah was described as friendly, outgoing and loving ... She was also a Dalmation/Lab mix, 74 pounds and already nearly four years old!

But with the confidence from watching The Dog Whisperer for more hours than she said she'd wish to admit, Valerie made an appointment to meet Delilah.

"From the moment I saw her she was bonded to my heart," she said.

Valerie was left with some important factors to weigh though as Delilah's full history unfolded, which included being heartworm positive, not always accepting of other pets and having inconsistent confidence with children.

"I also thought about what she could offer me as a snuggle bug, running buddy, adventurer, park companion and keeper of the home. The cons to consider paled in comparison to her positives."

Valerie sought out a reputable trainer to work with and then brought Delilah home with her on her birthday.

The first few hours at home were a little chaotic and unnerving for them both. Delilah was unsure of how to act in her new environment and so she pulled hard on the leash and jumped and danced with excitement.

Valerie had a plan, though.

Delilah went to 'day school' from 8 a.m. to 5 p.m. every day the first week with the new trainer, which helped her get used to her crate, reduce barking, accept greetings from others, and Valerie was shown how to lead her on a walk.

After the first week they continued to attend a weekly group class and Valerie watched in awe as Delilah's confidence grew.

"The classes have helped her anxiety tremendously. She is so incredibly smart and we've worked to that advantage. She has learned many commands and typically follows them without delay. She has accepted cats are part of this world too and accepts strangers with more ease."

The inseparable pair run together first thing in the morning and take frequent long walks and trips to the park. Delilah also loves games that work her mind (she loves her Kong!) and is a big fan of relaxing on the patio with Valerie while she reads.

"She is more my companion than any other dog I have ever had."

Adopting a bigger dog like Delilah has been a rewarding experience, Valerie said.

"It's very different but Delilah is able to offer and do many things my small dogs could not. She trains very quickly; she is an adaptable girl. She looks to me to guide her, where my little ones had a mind of their own."

Valerie mentioned the support she's received from APA! has been invaluable.

"Some moments have been rough with her not feeling 100 percent after her heartworm treatment," she said. "The support I've received from APA! is immense and continues on a daily basis. They have been a blessing to us. Not only do they offer me support but the volunteers continue to reach out to us, as well."

"Above all, through obstacles and joys, Delilah is happy at home and so is her mommy!"

Did you know that after an adoption, APA! offers continuous support? Thirty days of pet insurance, personal attention to ask questions and get answers about behavior, a basic training course and resources to continue training are all included. Plus, there is a whole team of volunteers and staff members to offer encouragement and good vibes to you along the way.