Welcome To The Brodie Bunch!

Welcome to the Brodie Bunch! We have many amazing cats spend some time here at the Petco on Brodie Ln.

Here are the stories of a few:

I met Miss Polly one November day in 2012. At 12 years of age, she was such a beauty!  Our meeting was brief, before I had to say goodbye, but I could not forget her.  I kept tabs on her, even though I went on vacation myself, wondering if she would get adopted during the holidays, but alas, she was still at APA! but now at Brodie Petco. I realized then that it was ME who was supposed to adopt her. It’s been almost 3 years, and many things have changed.  Most recently, our family moved to California. Miss Polly has been my rock through all the changes. We have finally settled into a permanent residence, where Miss Polly lives an easy life, lounging around in our home or hanging out with us in our backyard.  Thank you APA! for bringing us together! – Joyce L.

Satsuma and Valencia were two incredibly sweet orange and white tabby cats who spent a lot of time waiting for their people; they quickly became staff favorites and were spoiled rotten. They found their forever home in late 2014 just in time to spend the holidays with their new family.

This year we had Pancake the escape artist. Pancake was also a kitty who spent a lot of time waiting for her family, she was always front and center to great new visitors and charm them into giving her a few head scratches. She loved to play and in August she went home.

Jedi was a very shy boy who took his time getting to know you but once he did you had a friend for life. His future Mom would come to visit him often and then finally decided to make it official and bring him home. He was renamed Ruffian and then later on he even got a new feline brother from the Tarrytown cattery. Our resident Jedi dressed for the occasion on May the 4th.

One of the things we do here is a wall of fame. It’s always such a bittersweet moment when you take down the pictures from the Class of 2015 but that just means you are making room for the Class of 2016 starting with Richie the first of the Brodie Bunch to find his home in 2016! 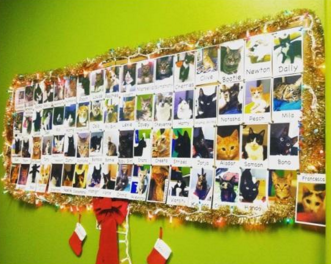