When It's Just Meant To Be 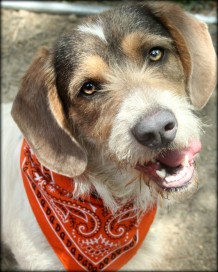 For Pamela Navarez-Fisher and her husband, Mark, Griff’s presence in their family was meant to be -- a collection of bitter-sweet, serendipitous moments.

Full of fleas and matted hair, Griff first streaked past Pamela and one of her two dogs, Bubbles, on an early morning walk in April. Unable to lure the nervous and seemingly stray dog close, Pamela let him be.

Later that afternoon a neighbor spotted a dog of the same description near the mailboxes and called Pamela for advice. Despite their efforts to catch him, Griff disappeared again; but he wasn't finished. Not yet.

Griff emerged once more from the shadows to tentatively follow Mark and the family's two dogs on their entire evening walk, stopping only to stand on the Fisher's front lawn with a lonely, yet hopeful, gaze. It was if he knew it was his last hope.

"And so, the journey began," Pamela said.

It took some convincing, but eventually Griff was persuaded to spend the night with the promise of food, water and a safe place to sleep. They discovered that despite an obvious lack of human attention, Griff had a warm and sweet soul, just longing for someone to love him and care for him.

As much as the family adored him, however, they knew it could only be temporary. Their eldest dog, Buttercup, was in the midst of a cancer struggle so was unwell and had always been untrusting of other dogs. They had to put her first.

The next morning Pamela reluctantly took Griff to Austin Animal Center (AAC) where, not surprisingly, they discovered he was not microchipped. No one seemed to be looking for him, either.

"It killed me to drop him off," Pamela said. "We got attached after such a short time, and I cried, but our Buttercup needed all of our attention and I knew he would be taken care of at AAC."

Griff turned out to be heartworm positive, intact, flea-ridden and had developed an upper respiratory infection. In other words, he wasn't on the top of the adoptable list and was at risk of euthanasia.

After hours of Facebooking, emailing and pleading to every animal-lover she knew to help, Pamela eventually told volunteers at Austin Pets Alive! about Griff. His story hit a soft spot and it wasn't long before Griff was taken to APA where his sweet personality became even more apparent to staff and volunteers.

Pamela spent the next few weeks dividing her time between caring for a very sick Buttercup and visiting Griff at APA, where she played a vital role in socializing him and gaining his trust. 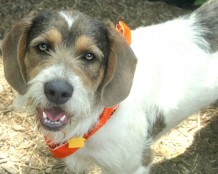 "She was his guardian angel from day one," said APA volunteer Summer Huggins. "She paid for his heartworm treatment and came to visit him often."

In mid-May, Buttercup unfortunately lost her battle with liver cancer and passed away, leaving behind a very distraught Fisher family.

With the heartbreak of Buttercup's death still fresh, they decided that they could make at least one positive out of the situation, though -- Griff had to come home.

The APA team was thrilled to arrange the adoption of a now very healthy, and significantly less-matted, Griff.

"We exchanged many tearful and happy emails during the process," Summer said. "I love the fact that he actually ended up in her home. It was just meant to be."

It's been several months now and Griff has settled into his new -- and probably first-ever -- home as if he just knew this was where he was destined to live.

"He took to our dog, Bubbles, quite well," Pamela said. "He is also very active! He walks every morning with Mark and loves the ball."

One thing the Fishers found helpful (and necessary!) during the transition was hiring professional help. Since working with a professional trainer, Griff has learned to walk well on a leash, curb his barking when the doorbell rings, work for treats and sit on command.

Pretty impressive for a stray!

"We work on his training on a daily basis," Pamela said. "It is so worth hiring a trainer. I knew what I wanted my dog to do, I just didn’t know how to do it or what commands to use."

Pamela also stressed the importance of having realistic expectations. "You can’t just bring a dog -- especially a stray that has been in a shelter -- into your house and expect everything to be perfect," Pamela said. "We want dogs to adapt to our world, and they can, but they need to be trained to."

In addition to focusing on training, exercise and socialization, Griff also works on his charm.

"Oh he is so cute, it just kills me!" Pamela said. "I'll try to be stern, and then sometimes Mark and I just have to laugh!"
For the Fishers, Griff was sent to them on that chilly April morning for a reason.

"He's definitely helped take some of the sting out of losing our Buttercup. Although they are polar opposites, he has helped take our minds off the sadness and loneliness we felt with her loss."

"He brings us great joy ... I would definitely call his story a tail-waggin' happy-ending!"