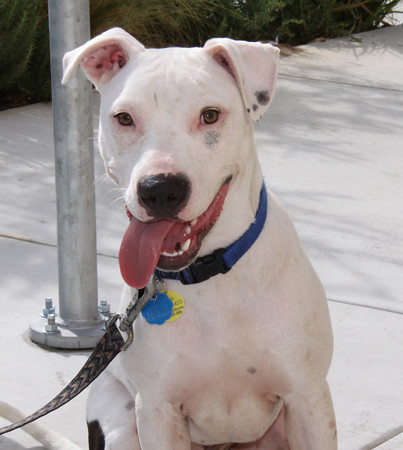 Hi everyone! Some of you may remember me from my handsome photo and story a few months ago. My name is Zane and I'm a very special, one year old American Bulldog mix. What I just did was graduate from a six week foster/train program at Lee Mannix Center for Canine Behavior. Not only did I graduate with flying colors, I was top of my class and used as the role model dog during training lessons. It's not surprising seeing as how I'm amazingly smart and love a challenge! It was pretty cool to teach my dog friends and, ya know, show off for the humans.

Now that I'm a graduate and role-model extraordinaire, I'd really like to find my very own forever home to settle down in. I've been bounced around a lot during my first year of life. First I was dumped out in the country with my sister, then I lived at the scary shelter where I had to endure being on the dreaded "list." I was finally rescued by APA! (thanks, guys!) but have moved between fosters before settling into my recent foster/train program. That's a lot of homes in just one year! I'm not trying to complain, but for such a loving, loyal dog, it would really mean a lot to have a permanent home and people of my own to give all this love and devotion to.

So, some more about me! I'm a playful, active (and athletic), highly intelligent, and VERY affectionate boy. If you let me, I'll snuggle right up in your lap! I would make an excellent running or walking buddy and all around fun, loyal companion! I love playing tug, fetch, and working out puzzle toys like buster cubes and Kongs.

My APA! people tell me I have a heart of gold that's just bursting with love to give to the special person willing to give a guy a chance. Obviously, I know tons of great commands from my recent training sessions. I also walk and run well on a leash, ride wonderfully in the car (and love car rides!), and am housetrained.

My APA! people also tell me that I'm one of the silliest goof-balls they have ever met. (and I've heard they call me Zaniac behind my back!) After going to school, my favorite word is "Come!" I will run to you at full-speed and sometimes forget to slow down when I get close. I guess I'm so excited that I want to jump in your arms or something. I don't know, but it's pretty hilarious when I do it. I think it's hilarious anyway.

This weekend, I'll be at the special Love A Bull event showing off my bully breed pride!  I would love you to come out and meet me! I have so much joy, fun spirited silliness, and, most of all, love to bring into someone's life. Could that someone be you?