March 2015 marked one year since we adopted Zuzu. It was a year of ups and downs, to put it mildly.

My husband and I had been looking for a young cat to adopt. We had two cats: Freddy, 8, and Lyle, 16. Knowing that Lyle wasn’t going to be around forever, we wanted a companion for Freddy. I had been monitoring the cats for adoption on the APA! website; and then 8-month-old Zuzu showed up. 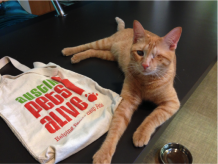 Zuzu is nearly blind; she had one eye removed as a kitten and can see only light and shadows out of her remaining eye. Since the eye damage happened when she was young, she never had vision. She wasn’t a fearful kitten; in fact, she was confident, bold, and sassy. I met her, loved her immediately, and that was that; she came to live with us.

Zuzu didn’t make friends in our pet family because they didn’t understand why she kept bumping into them. Fido, our dog, thought she was being aggressive and would snap at her; Freddy growled at her; Lyle just tried to stay out of her way. But Zuzu wasn’t apologetic; she would swat at them for getting in her way, and she chased Lyle at every opportunity. She became an outcast, so it was up to us to cuddle and play with her; and she needed a lot of both.

And then, out of the blue, Freddy was diagnosed with cancer and died 3 weeks later. We were shell-shocked and grief-stricken. After that, Zuzu’s behavior became aggressive. She relentlessly harassed Lyle, she tried literally to climb the walls, she bit my face, she stopped purring, she paced, she wouldn’t settle down for long, no amount or type of playing was enough for her...at this point, I described her as a bully.

I contacted APA! Cat Behavior; I researched everything I could think of that would pertain to Zuzu’s behavior. Nothing we tried made a difference.

So we decided that Zuzu needed a playmate, someone who would interact with her, play with her, help her burn off her energy, someone who could make her happy in the way that none of us were able to. It was risky. We could get a cat who was afraid of her; or one that might bully her; or together they might gang up on Lyle. If it were a kitten, would she hurt it? If it were an adult cat, would it have its own behavior issues that would make things worse? 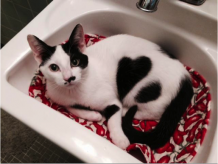 I monitored the APA! website and found Jax, a 5-month-old ringworm kitten. I explained the situation to his foster, and she was confident that Jax was easy-going enough for Lyle and bold enough for Zuzu.

Jax came to live with us, and since it took 6 weeks for his ringworm to be cleared, we had the luxury of time. They sniffed each other under the door, batted under the door, and saw each other through the baby gate. Then the day came that Jax was cleared of ringworm, and over the next week we gradually let Zuzu and Jax be in the same room.

Jax wasn’t afraid of Zuzu; he enjoyed chasing her and being chased, pouncing on her, and playing with her. He was amiable and happy-go-lucky; but Zuzu was aggressive, constantly hunting him. Most of the time we had to interrupt their interaction because she was too agitated. After she bit him on the leg and the wound became infected, we were afraid to let them be together at all.

Our fears had come true: the situation was worse.

I contacted APA! Cat Behavior again; I talked to seasoned and experienced APA! medical fosters and other volunteers; I researched some more. I started watching Jackson Galaxy.

And then a couple people mentioned anti-anxiety medication. That sent me into a flurry of research and soul-searching. I never thought I was the type of person who would medicate my pets (not that there is a “type”).

I took Zuzu to a feline eye doctor to see if there was something new and vision-related that could be causing her agitation. There wasn’t; and after observing her, he said she was smart and capable. And he explained that while anti-anxiety meds wouldn’t fix her behavior, it could create an environment where positive change could occur.

I talked to my vet, who supported the anti-anxiety medication plan for Zuzu. We did bloodwork to confirm she was healthy, and then started her on the meds.

Getting her to take the meds is a whole story in itself, one that I’ll mostly skip here; despite the excellent ideas from the APA! Adopters Facebook group, from my vet, and from hours of research, we couldn’t get Zuzu to take her meds. If she wouldn’t take her meds, things couldn’t get better, and we couldn’t go on the way it was. It was our darkest time - we talked about returning Zuzu to APA! or re-homing Jax. Both of those possibilities felt ruinous.

And the worst part was, I didn’t love her anymore.

It was hopeless. We hit rock bottom. Almost.

One evening, on a whim - what did I have to lose? - I stuck her pill in half of a chicken-flavored pill pocket (which she had eaten once, but then refused to eat again), rolled it into a little ball, and bounced it on the kitchen floor. That got her attention. It was something to hunt, something to catch; a game. She found it and ate it without hesitation. I swear I heard a choir of angels singing.

Every day after that, I bounced it on the floor, and she ate it.

After a couple of weeks, we noticed that she was calmer, less reactive, and definitely not agitated. We let her and Jax spend more and more time together. She would still play rough, but we would clap our hands and break it up. We researched the difference between cats playing and cats fighting and realized we were misunderstanding some of their interaction. We got better. Zuzu got better. Everything got better.

When it was suggested I write this story for APA!, I was hesitant. I asked: Does it count? Am I “cheating” because she takes meds?

Zuzu won’t be on meds forever. It has reduced her anxiety about being in a house where no one liked her, without an appropriate outlet, and then having Jax come live with us, who she saw as a threat. The meds allowed her to bond with Jax and to find her place in the home. All of that will remain long after she stops taking the meds.

Everything isn’t perfect. She (and Jax) bother Lyle more than I like, but we manage that. Fido doesn’t trust her and never will, and frankly wonders why his house is overrun with cats. Zuzu will always be a sassy, high-maintenance cat, but that’s her personality; the agitation was her behavior.

And the best part is, I love her again. I re-love her. And she purrs again.

Heartfelt and sincere thanks to the APA! Cat Behavior Team, the talented and generous medical fosters and volunteers, Jax’s foster, and the folks on the APA! Adopters Facebook page: some of you know how much you helped, some of you don’t. But this wouldn’t have happened without you. We are thankful and grateful!