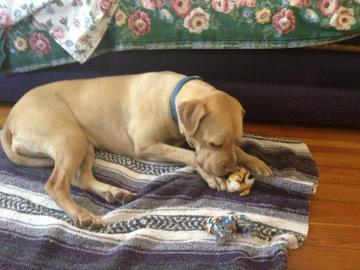 Sasha is a 5yr old Shar-Pei Mix that was rescued March 25th, 2014. Sasha adores being around people and she will often grace her loyal fans with a head bow so she can get a nice ear rub. No one told her that she might be too big as a lap dog, so she’ll try to get there if you let her. As much as she enjoys massages, Sasha also loves to play, whether it’s with a ball or a rope toy, or her favorite game – tug of war.

Sasha is in need of surgery on both of her knees. She has two torn cruciate ligaments. Sasha often times has a hard time sitting down because of the pain and is a little slower after bouts of playtime so surgery for her as soon as possible is very important to her quality of life!