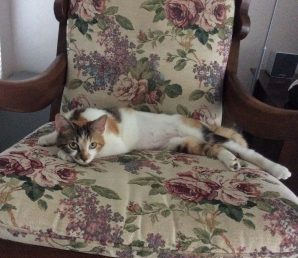 Precious – a 10 month old cat – was rescued by APA! at the very beginning of March because she suffered from a fractured pelvis and was going to be euthanized. After rescue, she was doing well in a foster home and was recovering without needed surgical intervention.

Fast forward to April 27th, Precious was rushed into the clinic giving birth! Feline gestation period in approximately 9 weeks, meaning she would have barely been pregnant and gave no indication of being so when she arrived at APA!. Because of her broken pelvis she was rushed into an emergency c-section.

Now she is having issues with her pelvis and needs FHO surgery, which costs $750. The worsening orthopedic issue was not caused by the pregnancy. If anything the pregnancy would have made it better.