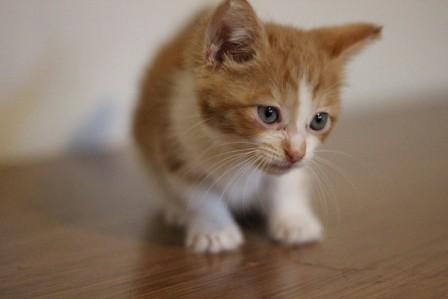 Every single person who ever held Sweet Baby Bear would exclaim “He’s so adorable! I want him!” Even the med techs! About a month ago, he seemed to be having ear problems. After several different possible diagnosis and unsuccessful treatments, it was determined that he needed a biopsy to figure out what was causing him to lose hair on his ears, and to have scabs on his tear ducts and nose. He also had a swollen toe. My personal vet, Dr. Erin Homburg of Austin Urban Veterinary, did the biopsy and he was diagnosed with pemphigus foliaceus:

Pemphigus is a general designation for a group of autoimmune skin diseases involving ulceration and crusting of the skin, as well as the formation of fluid-filled sacs and cysts (vesicles), and pus filled lesions (pustules). Some types of pemphigus can also affect the skin tissue of the gums. An autoimmune disease is characterized by the presence of autoantibodies: antibodies that are produced by the system, but which act against the body’s healthy cells and tissues – just as white blood cells act against infection. In effect, the body is attacking itself. The severity of the disease depends on how deeply the autoantibody deposits into the skin layers.

The hallmark sign of pemphigus is a condition called acantholysis, where the skin cells separate and break down because of tissue-bound antibody deposits in the space between cells. There are three types of pemphigus that affect cats: pemphigus foliaceus, pemphigus erythematosus, and pemphigus vulgaris.

In the disease pemphigus foliaceus, the autoantibodies are deposited in the outermost layers of the epidermis, and blisters form on otherwise healthy skin. Pemphigus erythematosus is fairly common, and is a lot like pemphigus foliaceus, but less afflictive. Pemphigus vulgaris, on the other hand, has deeper, and more severe ulcers, because the autoantibody is deposited deep in the skin.

It is extremely rare in kittens.

He started on his new med Sunday, 8/12, and it’s still too soon to see any improvement. It could take weeks. I don’t know yet if he will be cured, or if there will be long term symptoms or effects. But he has maintained such a sweet disposition and fighter’s spirit through it all. At night, I bring him out of his little kennel and he sits on my chest and purrs and purrs. I’ll keep fighting for him for as long as I can keep him comfortable. More medical bills are in our future I’m certain.