Our bold vision for the future of Austin Animal Welfare 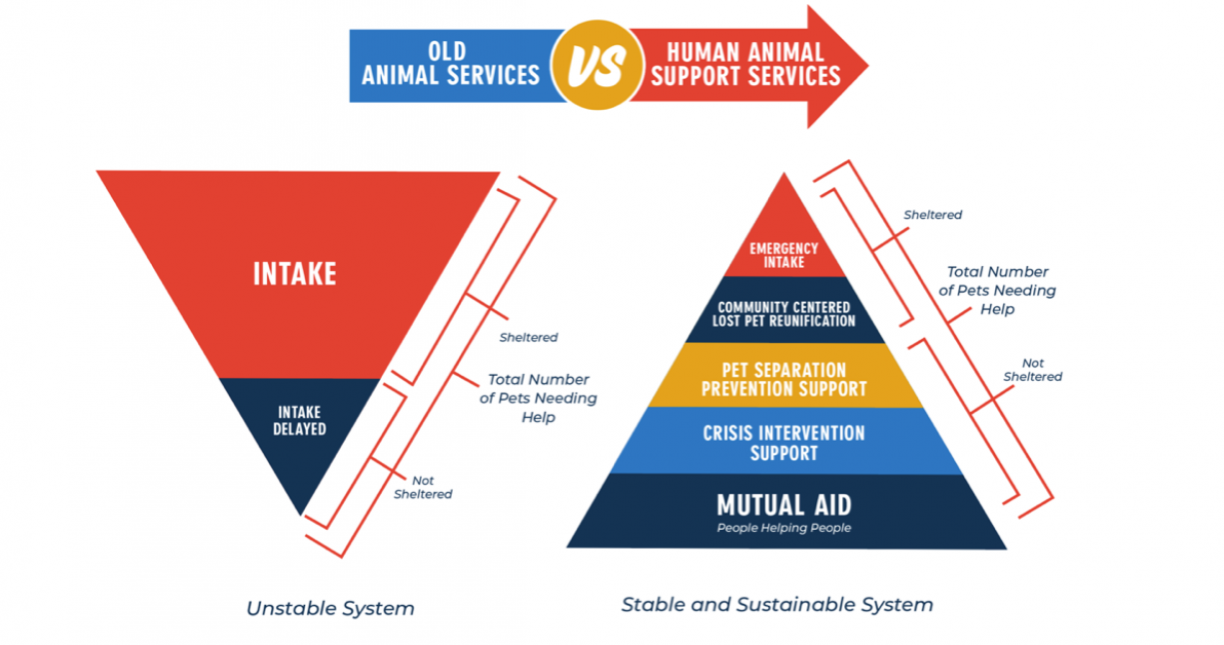 The highest values of the people of Austin are represented in the way we care for our community’s pets. Now, as the safest and most pet-loving city in America, we have kept Austin No Kill for more than a decade, ensuring every pet has a true chance at a live outcome from the city shelter. Because of you and the thousands of other Austinites who believe that pets’ lives have inherent value and that it is our collective responsibility to save them, our city has served as a beacon of hope to the entire nation, especially here in Texas, the state where more pets die in shelters than in any other state.

Since we began doing the work of making Austin No Kill, the world has changed dramatically and the role of APA! today is vastly different than it was in the past but our mission has remained the same since our inception: to eliminate the killing of shelter pets. That simple statement guides us as we build a better future in Austin, and throughout this country, using smart, data-driven tactics to ensure not only that killing stops sustainably but also that human-animal bonds are no longer needlessly broken and that the system used by government shelters is completely reimagined to support the bonds people have with their animals.

Our bold vision is two-fold for Austin:

The vision we have for Austin is of a city government that not only prides itself on being the largest No Kill city in the US but also takes action to truly eliminate the unnecessary killing of shelter pets. Elimination means that no pet who doesn’t need euthanasia to end suffering and is not inherently dangerous dies because our city doesn’t have the resources to care for them. Elimination is not temporary or “pulled off” year after year against all odds, as it is now. Elimination is permanent so that the option of killing pets no longer exists, no matter what. Austin is nowhere close to a system that supports this principle but we know it is possible.

In order to achieve this, our city government-run shelter MUST move permanently away from the anchor of historical municipal animal sheltering. The reason is that any improvement, even one as awesome as No Kill, cannot sustainably change an institution that is still driven by being a disposal for all animal problems and one that is built, both structurally and operationally, to push animals into the institution.

We envision an Austin that has completely abolished the old “animal focused” government system and has replaced it with a new and better system that addresses the human problems that drive animal homelessness. It needs to move from focusing on the result of human problems and instead target the root causes that lead to those results. This is something that no city actually excels at yet and we believe Austin can and should be THE ONE to master it.

You are likely asking, “Ok, how?” The answer is actually simple. It requires our city to take a deeper dive into communicating with Austinites, not just in a reactive or passive way as it does now, but truly undergoing a community assessment, neighborhood-by-neighborhood, to ask what the true human needs are that drive separation of pets from their families.

Then it requires using the information gathered about human needs to build programs with metrics that both measure and drive success. It also requires transparency about the assessment, the programs, the metrics and the allocation of resources and tax payer dollars to those programs so that our community, meaning you and me, can hold our government accountable for how well it is addressing the true needs.

This also requires a shelter assessment to reevaluate how the budget is currently being spent. It requires data to be collected and be reportable about the interactions with community members right now that result in animals entering the system.

And lastly, it requires a city wide service “ecosystem” assessment that maps out the resources for humans and animals that already exist. This would allow us to see where gaps in services exist and where help for people might be de-duplicated.

Using information from our community and from within the shelter, Austin can be THE city to permanently solve the shelter killing crisis. We would no longer see our shelter filling up with pets that already have people who love them year, after year, after year. The notion of a “space crisis” and the need to solve it through euthanasia would cease to exist.

This does not mean that a shelter isn’t needed. It means that the shelter we fund through tax dollars transforms into a facility that treats animal conditions temporarily, whether they are medical or behavioral. This would always include animals who fall through the cracks and need temporary help until they find a new home. However, with root causes being solved for, the much smaller number of animals who fall through the cracks can receive the care and attention that they need to move quickly from kennel to home, using metrics and programming to drive and measure successful pathways for each type of animal.

We truly believe that this IS the future of Austin sheltering but here is the catch: we have the vision but we don’t have control over any of this. We can’t easily move this process of government shelter transformation, because it is controlled by the city. The city of Austin shelter is responsible for all interactions with the public that drive pets from homes or streets into the shelter institution. In essence we operate, on purpose, in order to save all the lives at risk of euthanasia in the shelter, at the very end of our city’s defunct process for community human/animal problems.

Here’s what we do have control over: we can control what we contract ourselves to do for the city of Austin that keeps enabling an unsustainable system. We can control our advocacy efforts and, with you, apply pressure to the system to permanently eliminate the killing of shelter pets. We can start the community assessment necessary for change and we can keep building up our Positive Alternatives to Shelter Surrender (PASS) program to try to address needs, especially now, while widespread evictions are putting more pet owners than ever before at risk of losing their family members.

Texas is the worst state for the killing of sheltered pets. We find this utterly unacceptable. We have a vision of Texas, and the nation, that transforms into a safe haven for companion animals.

We know that No Kill is possible, even in a large city in Texas, because Austin achieved it. Austin is unique in a lot of ways, but a decade ago it was not unique in the number of animals it killed or why they were killed. It turns out that every city has the exact same problems and they are all solvable. So why isn’t every city No Kill already? Because there are massive barriers in place. Legislation, lack of government funding, leadership obstinance, apathy and the consequent disease that spreads in shelters when good protocols aren’t in place all play a huge role in the killing in government-funded shelters (city or county shelters are where most killing in Texas happens).

Short-term solution: As animals die by the hundreds every day in government shelters, we know we have to get animals out of these Texas shelters and into safety as fast as we possibly can. And we know that we can’t take them all. Just as in Austin, these death row animals don’t have time to wait for comprehensive solutions. The good news is that there are literally hundreds of rescue groups who would like to take in these animals, as many cities are experiencing a shortage of adoptable pets, especially in northern climates.

The top reasons that existing and eager rescues organizations are not taking all the at-risk animals in Texas government shelters are 1. Disease spread due to faulty vaccine and quarantine processes 2. Poorly accessible areas of Texas 3. The speed at which they are killed.

APA!’s vision is that every animal that enters a Texas shelter has a way out alive. We can play a big role in that without APA! having to take in every single one. We do this by:

Intermediate term solution: We know, from experience, that we have to target the behind the scenes causes of the killing across Texas and address each cause in order to get to No Kill:

Long term solution: Fundamental change: Our Human Animal Support Services (HASS) team, who support the HASS Project within AmPA!, are working with over 400 shelters to move from shelter-based programming to community-based programming. We truly believe that the key to sustainable change rests on the shoulders of government transparency and inclusivity. When people are empowered to set the future for how our four-legged family members are cared for in our community, they will. There are many aspects to this but here are a few:

In order for our vision to happen, as we have said in previous letters, we believe we have to disentangle ourselves from serving as “overflow” for the city of Austin and we need to be able to operate all of our efforts in support of our mission so that we can serve while simultaneously pushing Austin and move Texas out of the bottom tier of states who kill.

In summary, we envision an Austin that is the nation’s epicenter of lifesaving because we have a truly sustainable Never Kill plan.

An Austin that believes the human-animal bond is worth preserving and is fully committed to keeping pets and people together by serving them within their own communities, even in challenging times.

An Austin that has purposefully, permanently and sustainably shifted away from the archaic operating model of mass institutionalization of community pets in favor of providing consistent and reliable pet support services to anyone who needs them. Watch this video explaining the old model of animal sheltering versus the new model, Human Animal Support Services.

And we imagine an Austin that looks outside its own borders to move Texas to No Kill by helping loving pets in all Texas shelters. Without our incredible community, they have no chance at life.