Meet Angela Cole and her new best friend, Duncan, whom she adopted from Austin Pets Alive! last week. Angela came to Austin to attend SXSW. While soaking-up innovative ideas and meeting interesting people, Angela spotted an ad promoting a benefit for APA! at Wahoo's Fish Taco. Never one to pass-up an opportunity to help animals or sample great food, Angela decided to go and "dine well - donate well"! However, she got a little more than great tacos - about 45 pounds more... 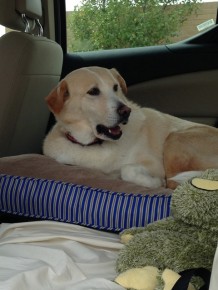 Amid the playful, perky pups, Angela spotted a beautiful, older yellow lab mix lying quietly in the corner. She couldn't resist his soulful eyes and soft, yellow fur, so she went to say hello. She learned that 11-year old Duncan is also heartworm positive. He was found wandering the streets about 7 months ago and was taken to the shelter where he was at risk of euthanasia due to his age. APA! rescued Duncan and he had been living at APA!'s Town Lake Animal Center ever since. As Duncan's head nestled into Angela's hand when she reached to scratch behind his ears, she lost her heart. Two days later, Angela came to APA! and spent some time playing and bonding with Duncan. As the saying goes, "the rest is history..." 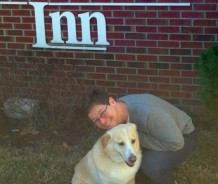 Angela cancelled her flight back to her home in New York state and is driving Duncan the 1,880 miles to his new home. Angela (and Duncan) are sponsoring Duncan's Drive for pet adoption. Angela wants to raise at least $1/mile - $1,880 - for Austin Pets Alive! to help care for the many dogs and cats who have not yet found their forever homes. Angela's family and friends in Bay St. Louis, MS have kicked things off with a donation of $105; so she only needs $1,775 to reach her minimal goal. According to Angela, exceeding the goal is welcomed and appreciated!