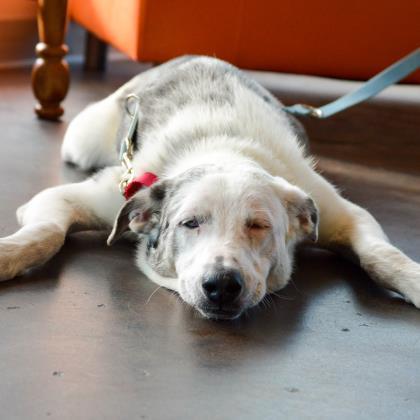 Get to Know (and help!) Henry – FUND COMPLETED! THANK YOU!

Oh Henry! Doesn’t he just melt your heart! Henry is a beautiful 1yr old Australian Shepard Mix that is quite the eye catcher with his captivating baby blue eyes. Henry has

been with APA since September 2014 when he was rescued from euthanasia at another shelter due to space issues.

Henry has partial vision loss as well as hearing loss. Both of these are congenital ailments that Henry was born with. As you can imagine this has made shelter life for Henry very challenging. Because Henry is such a young dog with vision and hearing handicaps, living in a shelter has caused some behavior issues in Henry. Poor Henry has anxiety issues and has a difficult time being separated from the people he knows. Can you imagine? Being so young and in an environment so unfamiliar, loud, and without a regular, reassuring voice? Henry has been able to mostly live in foster homes but even those homes have changed several times. Additionally Henry was just diagnosed with having elbow dysplasia in both front legs. Poor Henry just can’t catch a break. But, there is a light shining for Henry……..

Henry has potential adopters and has the possibility of living in his forever home! Henry has found the loving arms he so needs but needs our help one last time! Henry was evaluated by an orthopedic specialist but it is unclear what can be done for Henry’s elbows. The only way to know how we can help is to have a CT Scan of the elbows and see if there is a surgical solution for Henry. If there is not Henry will need to be on life-long pain medications.

Right now Henry is on pain medications daily. The CT Scan could tell us nothing can be done for Henry; but, if surgery is an option, it is the only way he will live pain free. Can you help Henry get the CT Scan and closer to a diagnosis? It has been a long journey for Henry, help us complete it for him!