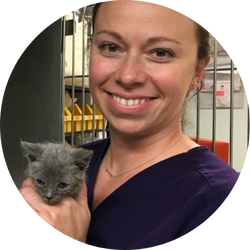 Dr. Alexis Bardzinski has been the medical director of Austin Pets Alive! since 2018. She started her veterinary career in 2011 upon graduating from Mississippi State University Veterinary College. Previous to veterinary school she worked as a veterinary technician at a No Kill animal shelter in her hometown Jupiter, Florida. After veterinary school, she initially pursued equine medicine but always had the desire to become involved with shelter medicine again. After finishing an equine internship and a couple of years as an equine associate vet she then began shadowing APA! veterinarians to gain efficiency in high volume spay and neuter. Shortly after, she began working part-time at San Antonio Pet's Alive, as well as APA! and In 2013 she became a full-time veterinarian at APA! Through the years she worked up to lead vet and played a large role mentoring other associate veterinarians, interns, and externs to spread our innovative No Kill treatment techniques and surgeries. She further desired to become more involved at a higher level as medical director in leading the clinic, building a solid veterinary team, and improving clinic efficiency.