This week, the Cat Program is looking at Dazey's Ward's performance in 2013.  Many cats are put on the euthanasia lists at animal shelters solely because they have ringworm, a fungus similar to athlete's foot, which is highly treatable.  Since ringworm is contagious and involves a lengthy treatment process, APA! developed Dazey's Ward in 2010 specifically to provide these sweet cats with the second chance they deserve.  In 2013, Dazey's Ward helped 235 cats and, of those cats, 178 were either adopted right from the ward or completed treatment and moved to an adoption center to find a forever home.  Dazey's Ward also provided assistance and treatment to dozens of cats and kittens in foster homes. 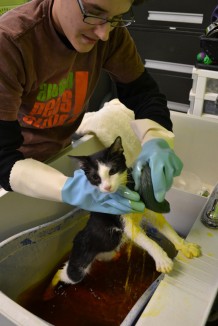 Wondering what you can do to help Dazey's Ward?  Our volunteer team is critial to saving these cats and getting them into loving, forever homes.  They are responsible for daily care, medicating, keeping the Ward sparkling clean, and providing tons of love and enrichment while the cats are in treatment.  A volunteer group called The Fungus Fighters meets every Tuesday and Friday to tackle the task of dipping and scrubbing the Ward.  If volunteering in Dazey's Ward doesn't work for you, please consider making a donation designated towards Dazey's (Ringworm) Ward to support its work.  The ringworm cats cost an average of $100 more to care for during their stay at APA!, so monetary donations allow us to continue saving these guys!