A note from Ellen Jefferson

On December 31st, 2013, I wrote you as I was sitting at my desk watching celebratory emails mix with emails from APA! staff and volunteers about the dozens of sick, injured, and young pets that needed our help.  In that email, I introduced you to Tiny – a little Labrador who came into the City shelter severely emaciated and with extreme hair loss from Demodex mange.

His condition was so bad, we were worried that he had a lot more wrong with him than just mange.  We took a risk on him and, as happens so often with the animals that come into shelters and are deemed "unsavable", he showed us that all he needed was food, love, and a little medicine to treat mange.

I was writing to thank you and tell you the story of just one of the thousands animals APA! saved last year.  Tiny is now a BIG healthy dog and is looking for his Forever Home.  And… well, as he has grown into his skin, he’s let us know that he is more of a Mastiff mix than a Labrador mix!  Check out these before and after photos of Tiny. 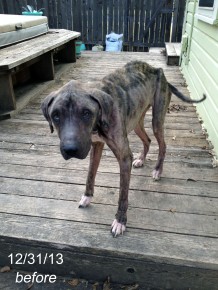 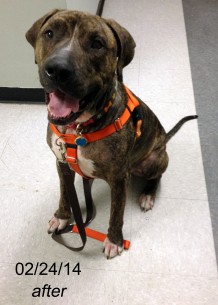 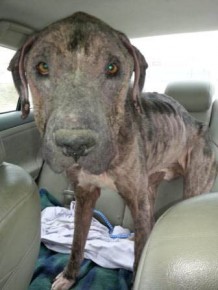 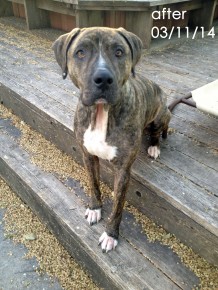 Thanks again for all of your support!