APA! and the Master Plan

Austin Pets Alive! will be included in the Master Plan for Lamar Beach.

You and other APA! Advocates flooded city hall last night at 6:00pm, registering your support for item #60, clad in APA! shirts and holding home made signs. 259 of you registered your support of the item, and the Council and Mayor got the message: Austinites wanted APA! in the heart of Austin.

As the council jumped from agenda item to agenda item, APA! supporters didn't let the imminent storm scare them off. Many stayed to the wee hours of the morning to hear APA! proponents speak.

Excitement mounted as item #68, which allowed for additional kennel space for the Austin Animal Center, passed 7-0, and the Council moved on to Agenda Item 60. 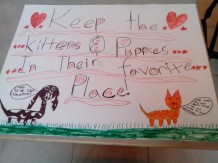 At 2:00 am, agenda item 60 came up for review at long last. Though the original crowd had dwindled, enthusiasm had not. APA! speakers included APA! Executive Director, Ellen Jefferson, FIX Austin Founder, Ryan Clinton, APA! Capital Campaign Chair, Rusty Tally, and Team Spiridon Executive Director, Rob Hill.  The speakers were concise, articulate and full of data that spoke for itself: APA! is a leading (critical) piece of Austin's no kill journey.

The item went up for a vote at 2:30 am and passed unanimously.

Austin Pets Alive! has a long journey ahead. Thanks to your support, we took an important step forward on that journey last night.

A special thank you to Mike Martinez for sponsoring the item and Laura Morrison for co-sponsoring.

You can watch the video of our item and presentations here: http://austintx.swagit.com/play/06122014-572