In 2015, 7,621 dogs and cats entered the care of Austin Pets Alive!. These dogs and cats ranged from day-old neonatal kittens and puppies to senior hospice cases and absolutely everything in between. Despite their countless differences, all of these animals have one thing in common: they all were cared for by the Austin Pets Alive! Medical Clinic. A huge component to making any city a No Kill City is the ability to take in and care for animals with treatable medical conditions which are often death sentences at traditional shelters: something as simple as ringworm up to animals in need of intensive care. At the same time, no-kill shelters provide ongoing routine wellness care to the animals in their programs so they remain healthy and ready for adoption. Austin 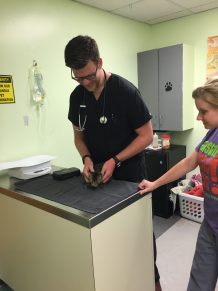 Pets Alive! has assisted in making Austin a No Kill City by saying “yes” to helping out the dogs and cats that everyone else has already declined. Without the dedicated staff of the Austin Pets Alive! medical clinic, this would not be possible.

APA!’s medical clinic operates simultaneously as a general medical clinic providing wellness care, high volume/high quality spay-neuter surgeries and treatment for basic illnesses as well as providing hospitalization care, emergency surgeries, and intensive treatment for serious illnesses. The APA! clinic is tiny in both physical space and staff but huge in accomplishments and heart. In 2015 alone, the animals in APA!’s care underwent 46,505 exams and surgeries.  While a small portion of those exams and surgeries were performed by consulting specialists, private vets, or originating shelters, the vast majority were completed by APA!’s own dedicated medical staff. That staff is comprised of two full-time veterinarians, two co-managers, three receptionists, and eight technicians. These fifteen staffers are further supported by a handful of dedicated volunteers and contracted relief veterinarians.

At minimum, every single one of the 7,621 animals transferred into APA!’s care received an intake exam upon arrival to APA!. At intake, the pet is given vaccines, provided flea/heartworm prevention, dewormed, microchipped, and examined to provide an overall assessment of the pet’s health status. Additional treatment may be provided as well. Up to 85 percent of the pets entering APA!’s care have an illness of some sort, so the intake exams are critical to addressing existing problems, as well to make appropriate housing decisions for animals with communicable illnesses such as ringworm, feline leukemia virus, sarcoptic mange, or upper respiratory infections. 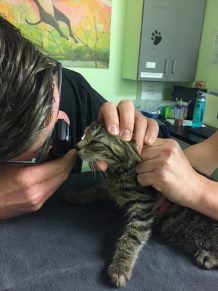 booster vaccines every two weeks until four months of age, adult cats and dogs will receive a two-vaccine series, and all cats and dogs over three months of age are rabies vaccinated by an APA! veterinarian. The clinic also reserves daily appointment slots for foster animals. On-site animals with illnesses or in need of follow-up care are triaged and seen each day in order of the severity of the illness.

Following the guidelines for High Volume/High Quality spay/neuter surgeries, APA! vets perform up to 165 spay/neuter surgeries per week. Kittens and puppies are spayed/neutered when they reach two months of age and two pounds in body weight. Adults healthy enough to undergo surgery are scheduled for the next available surgery slot upon intake. Post-operative care is managed by a highly skilled technician and team of trained volunteers. Specialized surgeries such as mass removals, dental care, and wound repairs are also performed on an as-needed basis.

The City of Austin calls on APA! to save more than 95 percent of the seriously ill or injured animals that they receive as strays or from the public. This includes cats in renal failure, dogs who have been hit by cars, animals with severe wounds or burns, and pets with viral infections such as parvovirus or calicivirus. Upon arrival, these animals require intensive treatment akin to that which would be received at an emergency clinic: hospitalization, ongoing critical care, supportive care such as fluids and force feeding, and emergency surgeries. For cases requiring treatment or monitoring 24 hours a day, APA! calls upon a group of medical fosters who have been trained to continue to care for and support critical cases in their homes. This combination of hospitalization and usage of critical care fosters allows APA! to save as many of these serious ill or injured animals as possible and upon recovery, leads to the placement of these animals in loving homes.

Without the support of a hands-on medical staff, Austin Pets Alive! would not be able to say yes and take on animals in need of ongoing care or with short-term but intensive needs. Most people would think that running a general wellness, surgery, and emergency clinic is incredibly expensive but Austin has proven that it doesn’t have to be. Austin Pets Alive! was able to develop and maintain this level of care through careful budgeting, taking advantage of grant funding opportunities, maintaining a highly-trained staff with a diverse set of skills, and training volunteers to provide additional support.