APA saved half of savable pets to be euthanized in FY10

Thank you so much, everyone! With all of your hard work and support, we saved about half of the savable dogs and cats who were on the euthanasia list at TLAC last year!

We directly pulled 2,974 pets and were able to get at least another 500 out due to the efforts of our rescue team finding other solutions besides death, like marketing those pets who were hidden in the stray kennels and getting them adopted straight from TLAC.

The intake last year for dogs and cats was about 22,000. Of the 9,000 dogs and cats who were scheduled to be euthanized, we roughly estimate that 2,200 of those animals needed to be euthanized to end suffering that couldn't be fixed or serious aggression. That leaves 6,800, for which all of our awesome volunteers, staff, and supporters helped get out over 3,400.

The kill rate was 27%, the lowest in history, which would have been 41% or higher without all of the hard work from all of you.

In 2008, Dr. Ellen Jefferson became the Executive Director of APA to help with a gap she saw in our community. A lot of resources were being put into spay/neuter services, but live outcomes (adoptions, transfers to rescue groups, and returning lost pets to their owners) had remained stagnant. Her vision for APA was to increase the live outcomes while the other groups were doing the very important work of reducing intake.

We've put together a chart to show the live outcome numbers over the last 10 years: 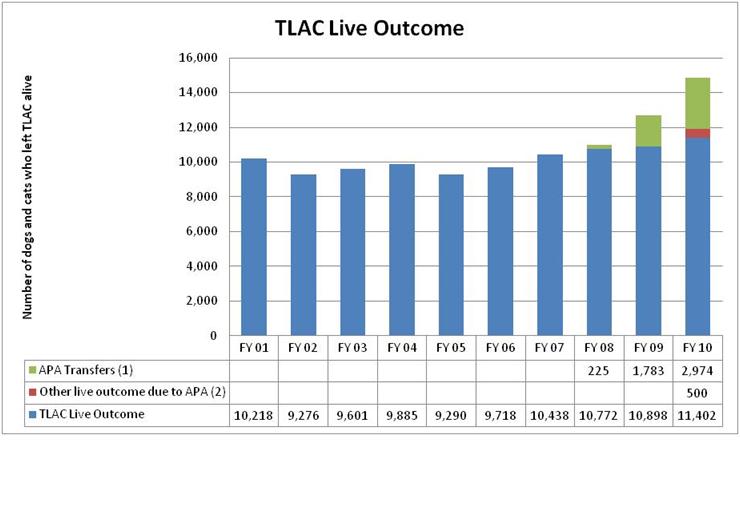 (1) TLAC has reported our total intake number for FY2010 as 2,827. We believe that the 147 difference is due to incorrect data entry on their end for animals that were born in our program (189 total for FY2010) and are currently working on this issue with them.

There also may be a slight yearly difference (less than 0.5%) between what we report and what TLAC reports due to data entry around the beginning of a new month. For example, we may account for an intake on October 1st when TLAC accounted for that outcome to us on September 30th.

(2) Other live outcomes due to the work of the APA is a conservative estimate of our Rescue Team's work at TLAC through marketing, assisting owners with reclaiming their animals, finding other rescue groups for the animals to go to, or evaluating and improving animal behavior so they can go into TLAC's adoption program. This work was also being done in FY2009, but we were not keeping data on those efforts that year.