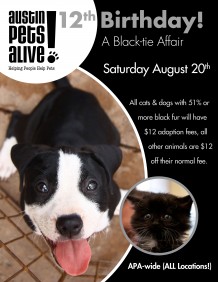 This week, APA officially turns 12 years old.  Back in the 90's, a group of concerned citizens formed Austin Pets Alive! to make Austin no-kill at the millennium.  While they made great strides in increasing Austin's live outcome rate and made a lot of positive changes for the animals in the shelter,  they were ultimately only able to get the live outcomes to 50%.

Meanwhile, after the millennium, other communities in the US started saving up to 90% of all pets who went into their shelter system.

Then in 2008, Dr. Ellen Jefferson became the Executive Director of Austin Pets Alive! with the intention of making Austin the largest no-kill community in the US.  From that date until now, Austin has seen its live outcome rate soar and we've been around the 90% rate for the last 7 months.

Please come celebrate with us on Saturday at our building for our "Black Tie Event." We'll have champagne and treats and our pets will be dressed in their best formal attire, hoping to make a great impression on you.

In addition, to commemorate the occasion, we'll also be offering $12 adoption fees for any black dog or cat and $12 off the regular adoption fee of our other pets at both our building and all of our adoption locations.