When we first introduced you to this little kitten, Nelson, he had just been moved from the Bottle Baby Nursery to a foster home with his two siblings. Nelson was brought into Town Lake Animal Center as a "stray" but he was just a bottle baby. We immediately noticed that his face looked a tad bit different ... a little lopsided pink nose, his right eye oddly shaped. Our vet staff reported that it was just a small birth defect and that he is probably blind in his right eye. He was monitored to make sure his eyelashes weren't hurting his eye, but he just kept on growing & developing, learning to play, and loving the people caring for him.

Now, we are happy to report that he has grown into a gorgeous fluffy 2 month old kitten and is ready for adoption! He acts as though not a thing is different, and to him, he is perfectly normal. 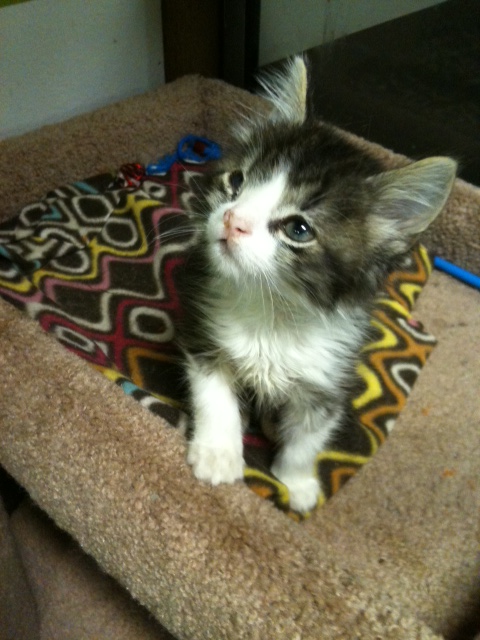 His foster says that out of all 8 kittens she has fostered this year, Nelson is by far the sweetest. He gets along easily with other cats, kittens and even dogs including a Chihuahua, Akita & Golden Retriever. But mostly, Nelson prefers his people. He wants to be held and pet, and loves his chin scratches best (watch the video). He does well with children, too.

We love these special little kittens. It's rewarding to not just be a part of their rescue, but to see them growing up, learning to play (watch the video) and being so happy on their way to long lives with families of their own.

If you would like to learn more about adopting Nelson, send an email to [email protected]. And if you'd like to volunteer to be a part of the amazing Bottle Baby team that gives these little ones their first chance at living long lives, contact [email protected].