Brie is a black & gold tortoiseshell cat rescued from a local shelter that was closing down. She is a big girl, weighing in at 10lbs. At almost two years old, she's still a little shy, but that won't stop her from approaching you and letting you give her some pets along her sleek and soft coat. She may even try to give you a sweet kiss! Brie is a calm cat, not too needy or talkative, and just wants a lifelong companion and a place to call home. She would prefer a place where she has lots of places to lounge and nap, perhaps even with windows where she can soak up some sunshine and get the occasional glimpse of a bird or squirrel. 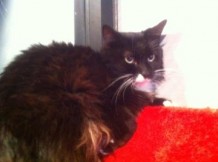 Brie shares her enclosure with Fran, who  is a two year old petite Tuxedo gal. Fran is also a little shy. Fran loves to climb on her carpet tower, find a nice nesting spot and curl up for a nap. She also enjoys being gently brushed to keep her longer coat soft & tangle-free. Fran originally came from a home with other cats after her owner died. Atop the carpet tower, Fran has a great view of the Tarrytown adoption center. Her vantage point also gives her a bit of confidence, and for a shy gal we know this is good for her! And when Fran met Brie, they quickly bonded and are now are best pals! They don't have to be adopted together, but they have become great pals and keep each other company while they await finding their new families. Sometimes, they both squeeze themselves into the top perch of their tower and snuggle up for a good snooze. 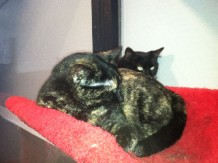 These ladycats are featured as part of the "Back in Black" adoption event through the month of May, and each has an adoption fee of only $50. They are available to  meet interested adopters at the Tarrytown adoption center, located at 3108 Windsor Rd., west of Mopac just before the stoplight at Exposition Blvd. Store hours are 12-5pm weekends and 1-6pm on weekdays.