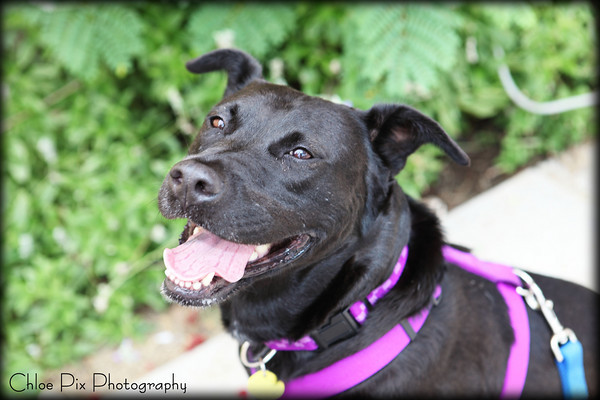 Update 10/1/10: Dixie has been treated for heartworms in her foster home where her separation anxiety disappeared in the presence of a canine buddy. She is very healthy and ready to go to her new home!

Dixie's a beautiful daydreamer.  Watching her relax with her sweet face resting on a stuffed turtle just like it's a pillow, you can see that there's a lot going on behind those pretty eyes.  Dixie has been described as an old soul and that captures her personality very well.  She's intelligent, mellow, and has wisdom and experience beyond her years.

Of course, that doesn't mean she doesn't have a silly playful side!  Dixie LOVES the water.  She swims like a fish and submerges her entire body, snorting face included, in the shallow edge of the lake and rolls around like a piglet.  It's one of the most hilarious and adorable displays you've ever seen.

She also loves to go for walks or just roll around in the grass outside.  She's been known to chase a squirrel or bird when the mood strikes her too!  She transforms from a perfectly mannered walker to a goofy puppy bounding after furry or winged creatures and then smiles up at you as if to say, "Hehe.  That was pretty cool, huh?"

So why isn't this lovely lady adopted yet?  Talk to the APA volunteers, adoption counselors, and fosters who have taken her into their homes and they'll tell you that Dixie is a joy to have around - that she makes them laugh with her silly bounding play, her pure joy when she rolls in the grass, or the way she'll lay her head in your lap.

That is what those who know Dixie say. Unfortunaely for Dixie, she has a few silly stereotypes that sometimes work against shelter or rescue dogs and which we'd like to dispel TODAY. Dixie just needs someone who will sit down with her and play with her - you'll quickly realize that she is just like the gawky tall kid with braces - and like the awkward kid, she'll be dotingly adoring of the first person who shows her that she is special enough to have a home and a family of her very own.

1. She's black.  So what, right?  Black dogs are beautiful with their glossy coats and sly markings showing up against their dark fur.  So why do they consistently have a harder time finding homes?  There's speculation that maybe they're not as flashy as some of their compatriots?  Who knows really.  We just know that the color of a dog's coat is a crazy thing to have stand between them and a forever home!

2. She's maybe, possibly part pittie.  Those of us who know pitties know that they rock and would never count that against a dog!  We also know that 9.999 times out of 10, a dog's breed is nothing more than a best guess and a more accurate label for any mixed breed dog is just that - a mix.

3. She's older. About 5 to be exact.  Arguably one of the coolest ages a dog goes through.  No more puppy drama but still plenty of energy and love to go around.  Adopting an adult dog is fantastic and something a lot of us wouldn't think twice about.  Lots of people do still prefer to "ooh" & "aah" over the roly poly puppies and walk right passed dogs like Dixie.  The puppies are, without question, ADORABLE.  But guess what, so are the canine grown-ups!

4. She's heartworm positive.  Yes, this is sad.  It's sad anytime a dog has to go through this very easily preventable disease.  But not only is it preventable, it's also TREATABLE and very curable as well.  UPDATE 10/1/10: Dixie has been successfully treated and is now heartworm-free!

5. She has separation anxiety. This is actually the only thing about Dixie that truly requires additional help and TLC.  Separation anxiety, simply put, means a dog fears that their newly loved person isn't going to come back and they may act frantically, commonly doing things like chewing up parts of the house.  But this too, is treatable and APA! has a wonderful trainer to support adopters (or fosters) willing to work with Dixie to gain her trust and help her feel safe.  She just needs the time and the slow introduction to being left alone so that she can understand her person will always come home and isn't going to leave her ever again. 10/1/10 UPDATE: Dixie has done wonderfully while in a foster home with another dog. A home with a buddy would help her feel safe and secure.

For the most part, the list of "unadoptable" traits is just plain silly!  And #s 4 and 5 are part of the journey you get to take when you adopt a dog who just needs a little extra love and support.  Those of us who have adopted a dog that takes us on a journey (and really, don't they all?) knows what an amazing experience that is.  It's not an exaggeration to say it makes us better people.  And when Dixie's adopter(s) get to look into their best friend's eyes and know that they've helped her to feel truly safe and loved for the first time in her life, there is no richer experience to be had. Special thanks to Chloe Pix Photography for helping us showcase Dixie.

Schedule a photo shoot with Chloe Pix Photography for your pet, and all proceeds will be donated to Austin Pets Alive!