This sweet dog is a year old but only weighs 20 lbs!  She is supposed to be at least 40 pounds.  She came to Town Lake Animal Center infested with fleas, ticks, and so weak that she couldn't eat.  She was so cold that her temperature would not even read on the thermometer.  The TLAC staff worked on warming her up, gave her iv fluids, killed all her parasites, and eventually she was able to eat.  They said that she would take a bite, then have to rest face first in her bowl to gather strength for the next bite.  She was doing better after a couple of days and TLAC was going to put her in the adoption kennels (because she is so sweet) but then she took a nose dive.  Her red blood cell count plummetted and she became so weak that she was about to die.  They called APA! to see if we would take her.

She was in need of a blood transfusion and medications for a disease similar Lyme Disease.  Curtis, APA's stellar adoption counselor, offered his dog, Bruce (also an APA! adoptee), up to donate blood to save her life.

It was shocking to see her.  She couldn't lift her head or focus on what was going on.  She was cold as a stone.  TLAC had her in a sweater and wrapped in blankets but as we removed them to examine her, we could see every rib, her entire backbone, and her pelvic bones jutting out of her skin.  She looked terrible.  In the picture below you will notice a toilet.  Since we don't have a facility, we have to do all of our work in homes (like mine).

BUT, after a couple of hours of Bruce's blood getting into her system, she started to come alive.  Her gums went from as white as her teeth to very light pink.  She started to wag her tail.  She was transported to her foster's home who nursed her through the night.  In the morning, she was eating and went on a very short walk.  She texted this info over after her second day:

"She has taken two short walks- one each day.  Eating well. Loves her kennel when I am gone.  She is a real sweetheart.  You should know that she is a lap dog and cuddle bug.  Very quiet but sweet to my dogs (will kiss their noses if they give her half a chance!)  I have yet to hear her bark, only grumble in pleasure when her ears are rubbed.  I am sure she has never been as happy as she has been since being rescued by APA!"

Thank goodness for great fosters.  This one just saved her life. 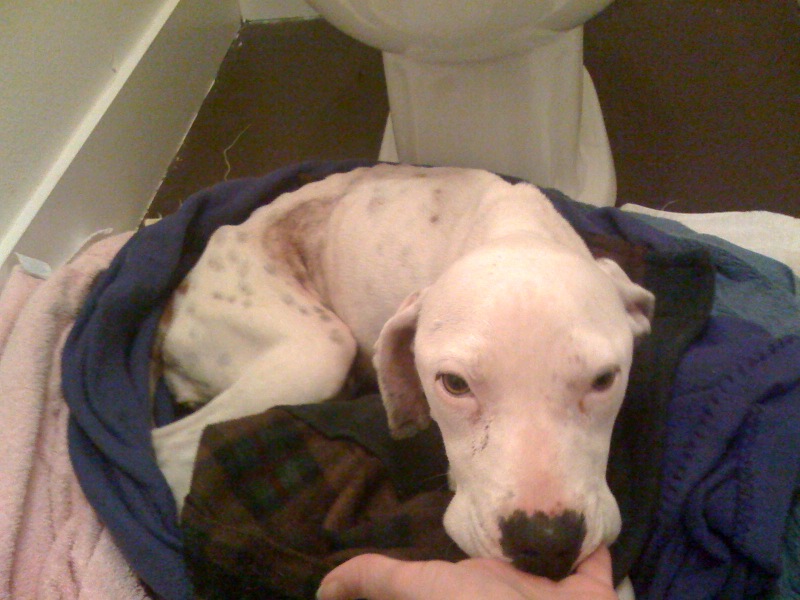