Thank you to February's Volunteer of the Month, Ranelle Merony. A dedicated volunteer in the neonatal nursery, Ranelle never leaves a feeding shift unfilled and is an asset to the team. 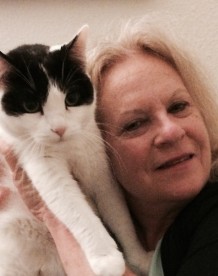 This is what her peers have to say about her:

I was left to work the overnight shift on a few nights this month due to a schedule change. A coworker had of family emergency and could no longer work that shift. I was faced with working it alone, unless a volunteer stepped up. Without hesitation, Ranelle volunteered to work a few of those nights. I don't know how I would have survived those nights without her!!! --  Jacqueline Redwine, Neonatal Feeder

I have not worked personally with Ranelle, but through the group emails, I have seen Ranelle volunteer for multiple overnight feeding shifts when the nursery was down a paid feeder and in urgent need of help. She also often volunteers to do transport for bottle babies between AAC and TLAC. I believe she has shown tremendous dedication to the mission of saving all of these little lives and deserves to be recognized as APA!'s Volunteer of the Month! -- Dana Agee, Neonatal Feeder

Ranelle is a feeder and foster for the Neonatal Program and goes way beyond the call of duty by picking up extra shifts practically every week--sometimes more than one or two shifts in addition to her weekly commitment. Ranelle keeps a succession of fosters for us also, often taking on the more difficult kittens (sick, ringworm) and she does numerous transports for the team. She also helps train new feeders, donates supplies regularly and helps with other needs as they arise in the nursery. -- Beckie Shafer, Neonatal feeder, Training Coordinator & Volunteer Liaison

She is always stepping in to cover shifts that have been cancelled, she stays longer than she is supposed to on her shifts, brings in supplies when needed, transports kittens from AAC to the med clinic, and fosters many ringworm kitties (the ones most people don't want to foster). I just feel like she helps out in many areas, is friendly, shows her passion and that she truly cares for the kitties. She's always stepping up to help. she deserves some acknowledgment! -- Veronica Campos, Neonatal Feeder

Ranelle is amazing! She's always the first to respond to shifts needing to be covered in the nursery if someone is unable to make it. Not just any shifts either, but the 9pm-3am shifts! She is so humble. Someone sent out a "thank you" to her in our yahoo group page in recognition of her fabulousness. This was her response:"Thx but there are a lot who do more and like everyone else I just do it cause I love the babies."
I mean sheesh, what a sweet woman! We love her, and she loves those kittens. Without volunteers like Ranelle, we wouldn't be able to keep all those little bellies full and save lives. -- Lauren Goot, Neonatal Feeder

Ranelle is a volunteer that you can always count on. She volunteers on a weekly basis Saturday evenings and always picks up shifts on top of her regular feeding shift. The midnight feeding shifts are the hardest to fill and Ranelle would help fill them on a weekly basis without hesitation. Not only does she volunteer in the nursery, she fosters kittens and helps transport. Without Ranelle in the nursery there would be a very big hole to fill. We are so lucky to have her!! -- Anonymous

And here's what she said when we got to know her a little better:

How did you get interested in volunteering at APA!?
In 2010, I was between pets and was living in the S Congress area. I happened into the old APA! trailer and fell in love with some pre-adopt tuxies. I followed up with their foster and a few weeks later my husband and I adopted two of them. After that, I would occasionally send $$ to APA! but I always wanted to give back in person to help save some pets, like my cat babies had been saved.
Then in the spring of 2013, a law student (besides being a full time practicing attorney, I am an adjunct professor at UT Law School), who knew I was a runner mentioned to me that she ran with dogs through a program at TLAC. I thought I could do that! But I wasn’t sure how, so I ended up at an APA! volunteer training session, and when the dog people went one way and the cat people went the other, I followed the cat people. Then I heard about the neonatal program and I have always loved tiny kittens (from being around them as a kid), so I went for the additional training and started helping in the nursery.

What are you most passionate about at APA!?
The kitties whose true potential, as cute fluff balls then awesome beautiful cats, is hidden by neonatal neediness, ringworm or nagging medical conditions.

What is your favorite thing to do at APA!?
I also transport (mostly tiny kittens, but also cats and I have taken dogs), so it’s a toss-up between walking out the door at AAC carrying live pets who would not be leaving there alive if it weren’t for APA!, and feeding hungry kittens in the nursery. It’s a nice hands on/manual labor break from my attorney life.

What are some words of wisdom for new APA! volunteers?

Be patient and remember why you are there-- for the animals. Staff people, all over APA!, are crazy busy and under a lot of stress, so try to make their lives easier instead of harder and do not take it personally if they seem rushed and/or pre-occupied.

Do you have a favorite kitten at APA!?
No, I really don’t. They are all precious to me and I try to look at each as someone’s future beloved pet.

What's an interesting fact about you people may not know?
I am a more than full time attorney, who has tried over 100 civil jury trials, I have run 7 marathons, the last one in 2014, and I have been married for decades, have 3 children and a perfect grandbaby.