Giving an Older Cat a Home 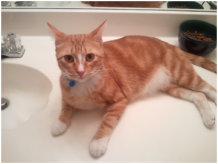 Back in September, Austin Pets Alive! worked with our city shelter to support surrounding area shelters to make room for animals due to the fires. One such cat was Pyro. He had been well cared for at his previous shelter, receiving necessary blood tests and vaccines. Once transferred to APA! we made sure he was still up to date and placed him in a temporary foster home.

While in foster, it was discovered that even though he is 5 years old, Pyro is still very playful. He especially likes his laser pointer and catnip. Pyro also proved to be gentle around young children, dogs and other cats and would often cuddle up with them for the much needed post-playtime cat nap. He brought new life out of the older resident cat who had spent most of her life as an only cat. When Pyro's foster gig was coming to an end, nearing the time when he would transfer to one of the many adoption centers APA! has around Austin, his foster family made the decision to adopt! Pyro's new name is Morris, and he is a happy boy.

"I wanted to let you know how excited we are to have Morris as an official member of our family.  Our other cat has lived independently for so long, that Morris has brought a new life out in her.  They play together, eat together, and snuggle with each other. Morris has filled a place in our home and our hearts that we never realized was missing. We want to thank you for all the work you do and offering these animals a chance in life.  We are so blessed that we have Morris and we would not have met him without you."
At a time when most everyone is seeking a tiny kitten to bring into their homes and families, APA! has mostly adoption-ready adults. Adult cats will often still have a spring in their steps, but for the most part they are laid back, sleep through the night, and love to lounge near their people. Older cats make incredibly loving companions. By adopting a cat you have a direct impact on APA!'s ability to rescue another cat. It frees up space in a foster home or in an adoption center, where the next cat can go. So think about how important adoptions are, come meet the kitties, and spread the word so more can find homes.