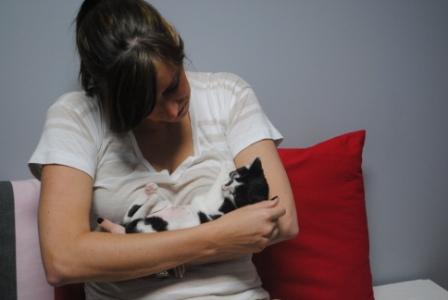 Our readers & supporters may remember hearing about a little blind bottle baby kitten we rescued, named India, who was one of the first Miracle Babies the Bottle Baby team rescued this year. India came to us mostly blind with a bad eye infection due to a common virus among cats, and thanks to a generous donor, we received the necessary funds to surgically remove what was left of her eyes… mostly scar tissue.

We began the process early of promoting India’s story in the hopes that someone out there would be interested in adopting this sweet black & white kitten who has shown so much resilience that her foster family was almost certain she could actually see.

After a lot of social networking, APA! received an email from a woman named Mary in Houston. Understandably, Mary had a lot of questions: How did this happen? What is her prognosis? Will she get along with other cats? All legitimate questions, but what became clear is that Mary had other reasons for asking.

Mary is in the process of writing a book about her parents, both of whom are blind and have been for her entire life. Mary’s parents have a remarkable story, one that proves true love doesn’t require sight (her parents met at Texas School for the Blind when they were both in 4th grade), and that success and achievement can be obtained no matter what adversity is faced (both of her parents led successful careers – her dad was even a Judge).

Mary’s own grown daughter saw the messages posted about our little blind kitten and simply said, “Adopting this kitten and what it would mean to our family will be a great addition to your book.”

And there it was.

So began weeks of communication between India’s foster family and her possible future family. Sharing information on her progress, her personality and her surgery, which was just performed on July 20th. On the morning of July 22nd, Mary and her daughter made the trip to Austin to meet India for the first time, and as if she knew the spotlight was on her, she showed what she is made of. She sniffed out a catnip mouse in the Courtney Griffin Greeting Room at the APA! Tarrytown Adoption Center, and batted it around playfully. She then found her way into the arms of the family there to meet her and quickly settled in for a cuddly nap.  Aren’t these the things that make anyone love a kitten?

Adoption complete, India settled into her brand new carrier with a handmade blue and white blanket from someone outside of Texas who heard about her story and wanted to give her something special.

And as it happens, emails were exchanged once India was in her new home in Houston. Her adopter wrote:

“We had a very pleasant trip home. India was a super traveler--not a peep! Katie [my daughter] kept looking back to make sure that she was ok, and she was peacefully sleeping. She's now in her new room, exploring and totally not looking like a blind kitten. On the way home, we had fun coming up with names. At one random point, I thought of Lily.”

“Lily” just so happens to be the name that the foster family called her, but this small detail was never shared between foster and adopter. Sometimes, it just seems that the universe aligns and brings us all a great ending to such a touching story.

Have a great life, little one! We enjoyed being a part of your rescue and your journey to a long, long life.

APA! has several other blind kittens and cats in our care, each waiting for a chance at finding their forever homes, including Neela, Kayless, and Barnabas to name a few. If you are interested in learning more, please email [email protected].