My APA! Alum and my kids don't always get along.  But that's okay.  They are teaching each other respect and boundaries. The other night, our dog helped us pass along another very important lesson: compassion.

Jesse (FKA Willis) was adopted 10/1/10, when we were newlyweds with a new house with a big empty backyard.  We hope 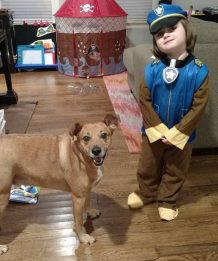 d to have kids at some point, and we were a bit concerned that Jesse had a big question mark next to the "good with kids" category.  He hadn't been around any in foster care, and this excitable young adult dog with anxiety seemed reactive to children in public.  At 35 rambunctious and sprinting pounds we couldn't scrounge up volunteers among our friends with kids to help him learn to stay calm around children.  So we put in some time and effort on the basics.  Then more time and effort.  Reining in his anxiety.  Eradicating his insecurity and replacing it with confidence in our pack.  Reprogramming his mind to check in with us to see if we trust a visitor, rather than take it upon himself to act as the family bouncer.  Demonstrating for him that kind, trustworthy people can wear boots too...apparently the opposite was a deeply held belief.  Just when we got Jesse where we wanted him to be, we dropped a bombshell on him: He was being demoted from Only Child to Family Dog...Baby #1 was on the way.  Baby #2 wasn't far behind.

All our hard work seems to have paid off. After the transitions as the new family members showed up (those are each their own chapter) we found that even though Jesse will never NOT try to snatch away the kids' food, he is a great family pet. 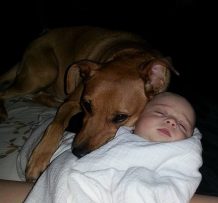 He makes us feel safe and keeps us company.  He exudes silly joy when we play outside and makes us all laugh.  Thanks to Jesse demolishing toys left strewn about, our kids have learned to pick up after themselves or suffer the consequences.  He rarely wants affection from the kids, but when he asks for it, they are finding his favorite spots to be stroked and I can see they are learning self-control and empathy from him.  One of the good things about having a dog who sets clear boundaries for himself is that my kids are learning to seek his consent and read his body language, and they use this knowledge when they encounter other animals and people as well.

Last night at bedtime my four-year-old requested a "scary adventure story with animals." I realized that we hadn't told our kids yet about Jesse's origin story.  I told him how Jesse had a year or two of scary adventures before he found our family. I filled in unknown gaps, and kept my rationalizations for why Jesse is afraid of men and very scared by boots age-appropriate, and of course there were the "rescuers" who helped Jesse in his most sad time find our family.  I saw my son processing all of it and look at Jesse with a little more respect than he had before, and before he went to bed, he asked Jesse if he could pet him. He softly told him, "You are safe now, Jesse. You are home."

Jesse has taught us a lot about how to care for animals, but compassion is really a universal language. Jesse has the same big brown eyes my kids have.  Each day they are learning to see each other a little better.